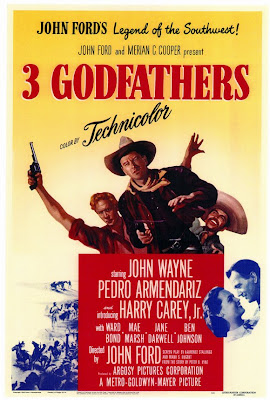 When one thinks of the classic Christmas movies, John Ford’s “3 Godfathers” (1948) doesn’t normally come to mind, but there’s no reason why it shouldn’t. After all they did celebrate Christmas in the old west and “3 Godfathers” elicits as much good cheer, warmth and hope as other fabled classics.

It was a fabulous evening.

“3 Godfathers” details what happens when three bank robbers (John Wayne, Pedro Armendariz and Harry Carey, Jr.) stage a holdup in an Arizona town. Chased by a posse and having their water bags shot in the ensuing chase by the town’s marshal (Ward Bond), they make their way across the desert. They lose their horses in a sandstorm and continue the trek on foot. 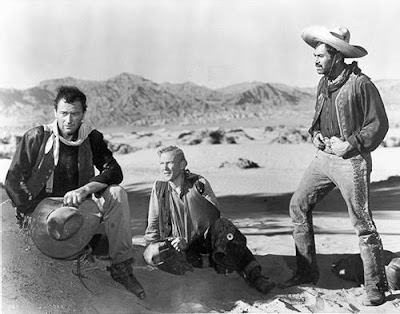 They come across an abandoned wagon with a dying woman (Mildred Natwick) alone and about to give birth. She asks the men to be the godfather of her child and see to his safety. A baby boy is successfully delivered and the mother dies. The three new godfathers, bereft of horses and short of water, decide the child’s safety is more important than their freedom and decide to bring the child to a town called New Jerusalem. Where is it? Well, there’s a real bright star in the sky over their destination that helps guide them toward the town. And it’s Christmas Eve.

Like a lot of Ford’s films, this offers equal doses of action, humanity, comedy, drama, pathos and a loving sense of community. Thanks to Winton Hoch’s stunning Technicolor cinematography, the famous Lone Pine, California locations never looked lovelier, or when needed, more desolate, than here.

The scenes with the men tending to the baby’s needs are not played for broad comedy, but instead are infused with a gentle humor.

This was the screen debut of Harry Carey, Jr. and the film opens with a touching dedication to his father, who had recently died and had appeared in many of Ford’s silent westerns. Carey Jr. went on to a distinguished career in many westerns and is thankfully still with us, having recently provided an audio commentary to Ford’s classic “Wagon Master” (1950).

Despite being bank robbers, the three are really not bad men. Before robbing the bank, they engage in some good natured ribbing with Bond and his wife (silent screen star and Ford favorite Mae Marsh). Other members of the John Ford Stock Company on hand include Ben Johnson, Hank Worden and Jane Darwell. The film’s composer, Richard Hageman, appears as a piano player in a saloon, playing Christmas carols on Christmas Day.

I was a tad nervous at last night’s presentation, as there was a large number of what appeared to be grandparents accompanies by their young grandkids. Would they be bored and start to get antsy? I needn’t have worried as there was very good audience attention throughout. I’d say there were about 150-200 people there, not packed but more than respectable for a 1948 western. The kids exhibited no restlessness at all. Maybe they had never seen a western before, so it was as alien to them as a new planet in a “Star Wars” movie.

Two nights before the Tivoli had shown “Miracle on 34th Street” (1947) but I left after a few minutes when the image was stretched to fill the whole screen. AARGH, I hate that. I complained the next day and received a very nice call from Chris Johnson, with Classic Cinemas. He was very apologetic and said it should have been projected in the right aspect ratio. He said they would make ensure “3 Godfathers” was screened in the right aspect ratio (square shaped) and it was. What a treat it was!

He said I was the only one to complain and I was surprised at that. Didn’t anyone else notice that Kris Kringle appeared shorter and squatter? A friend of mine has a theory that so many people now have big screen TVs and they want the whole image filled that they don’t even notice. Makes sense to me.

Anyway, if you’re tired of the traditional Christmas classics, and want to give a year’s rest to George Bailey, Ebeneezer or Bing and Rosemary, give “3 Godfathers” a chance. I think you’d be pleasantly surprised.
Posted by Kevin Deany at 1:40 PM

This wasn't bad, but I've seen better versions of this tale - namely the 1936 version with Chester Morris and the 1930 version (called "HELL'S HEROES), which starred Charles Bickford and was directed by William Wyler.

It really is a foolproof story isn't it? I liked those versions as well, especially the Wyler, but my hesrt is still with the Ford version.