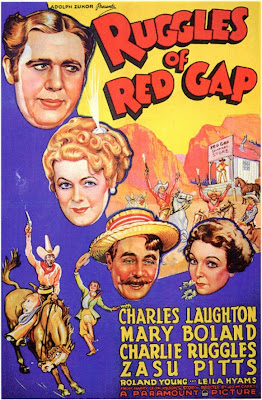 Many thoughts occurred to me while watching “Ruggles of Red Gap” (1935), all of them happy ones: Charles Laughton was one of the movie’s greatest actors, Leo McCarey one of its best directors, and how in the 1930s Paramount was to comedy what Warner Bros. was to gangster films and Universal was to horror.

In 1935 Laughton had a year that most actors can only dream about: Captain Bligh in “Mutiny on the Bounty”, Inspector Javert in “Les Miserables” and Ruggles, the English butler who is dismayed to learn his employer, the Earl of Burnstead (Roland Young) has bet him in a poker game and lost.

His Ruggles portrayal may not be as flamboyant as Bligh, or as nuanced as Javert, but it’s every bit as memorable. His Ruggles is the ultimate gentleman’s gentleman who knows his status in life, and nothing will ever dissuade him otherwise.

That is, until he arrives in the town of Wild West town of Red Gap, Washington, with new employers Egbert and Effie Floud (Charlie Ruggles and Mary Boland). Egbert doesn’t believe in any class nonsense, treating Ruggles as a friend rather than a servant, and introducing him to the Red Gap citizenry as Colonel.

Laughton engages in a marvelous piece of pantomime when he realizes with dawning dismay what his new owners are like. Egbert favors loud checkered suits, cold beer, hollering like a cowpoke on a cattle drive, and insisting Ruggles walk into a door ahead of him. 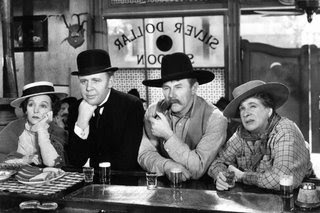 Except for some snobbish members of the Floud family, everyone in Red Gap treats Ruggles as an equal, and he slowly succumbs to the idea that he is his own person and not confined to his role as servant. In America, the possibilities are endless.

There’s nary a mean thought or idea throughout “Ruggles of Red Gap” and I thought it was just grand. Director Howard Hawks once said a good movie had three good scenes and no bad ones. Well, “Ruggles of Red Gap” has many good scenes, with a few standouts. One well-loved scene has the English Ruggles reciting the Gettysburg Address to customers in a saloon.

There’s another marvelously loose scene between the wonderful Leila Hyams and Roland Young as they perform the song “Pretty Baby” on the piano and drums, respectively. Parts of it look improvised, and I would swear that Hyams and Young are going to break out of character at any second. They seem to be having a ball and that’s contagious to the audience.

What a talent McCarey was in the 1930s. In 1929 he directed one of Laurel and Hardy’s all time masterpieces “Liberty”, with Stan and Ollie trying to change pants with each other on the steel girders of an under construction skyscraper. How they got in that situation is as funny as their antics on the skyscraper.

That glorious short is like a peek into what the 1930s would hold for McCarey. We have the Marx Brothers classic “Duck Soup” (1933); “Belle of the Nineties” (1934), one of Mae West’s best; the wonderful “Six of a Kind” (1934), a road picture with George Burns and Gracie Allen, Charles Ruggles and Mary Boland (again) and W.C. Fields; “The Milky Way” (1936), a good Harold Lloyd vehicle; the shattering drama of old age “Make Way for Tomorrow” (1937); the classic screwball comedy “The Awful Truth” (1937) with Cary Grant and Irene Dunne; and “Love Affair” (1939) with Irene Dunne and Charles Boyer.

Most directors would be thrilled to have one of those titles on their resume, but McCarey hit it out of the park consistently throughout the 1930s.

Apart from Bing Crosby’s Father O’Malley movies, McCarey seemed to disappear for long stretches in the 1940s and 1950s and I don’t know why. I need to see if there’s a biography of McCarey to find out what happened.

But we’re discussing the 1930s here, and McCarey’s grip on “Ruggles of Red Gap” is secure throughout.

It would be easy to make the Red Gap citizens a bunch of buffoons and be contemptuous of them, but McCarey shows great affection for their eccentricities. Imagine Mayberry in the Old West and you have an idea of what Red Gap is like.

As I said before, Paramount was THE studio for comedy in the 1930s. Lubitsch was there, as was W.C. Fields, the Marx Brothers and Mae West. Claudette Colbert was making her name at Paramount at the time, in little gems like “Three Cornered Moon” (1933) and “The Gilded Lily (1935). Carole Lombard was also turning out wonderful films like “Hands Across the Table” (1935) and “The Princess Comes Across” (1936).

Paramount’s musicals were of a high standard – not only the Lubitsch musicals and “Love Me Tonight” (1932) (not Lubitsch, but it may as well be), but the early Bing Crosby vehicles hold up very well today.

All that talent seemed to rub off on each other and produced great movies. Almost by osmosis, it’s like all these people knew they were among giants and were determined to outdo one another. We the audience are the lucky recipients and it’s a testament to their talents that these films still hold up so well today. There’s something special about these 1930s Paramount films that continue to resonate.
Posted by Kevin Deany at 12:39 PM

Just "discovered" your wonderful blog. Please visit mine and sign in to follow, if so inclined (love to see those gallery seats fill up!)
http://alfredospaella.blogspot.com

Thank you sir. I most certainly will visit.