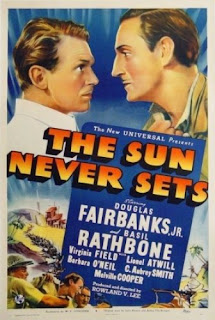 Universal Studios' THE SUN NEVER SETS (1939) sounds like its the quintessential salute to the British Empire. It's not, and it's curiously actionless for most of its 96-minute running time. But the themes of sacrifice and love for country are prevalent throughout, and coming as it did to theaters on the eve of World War II, it likely struck a chord with audiences – not just the British – about the world wide sacrifices soon to come.

Set during contemporary times, THE SUN NEVER SETS focuses on the Randolphs, a family who have dedicated themselves to England for several centuries. Basil Rathbone is Clive Randolph (named after the famed British statesman Robert Clive perhaps?), returning to England with his wife Helen (Barbara O'Neil) after 15 years of service as Commissioner in the Gold Coast of Africa (present day Ghana). They both look forward to serving their country from England and raising a family.

Younger brother John (Douglas Fairbanks, Jr) is something of a hothead, and doesn't believe in following the family trade of diplomatic service. He's resentful of the sacrifices made to his family. When John asks why the family does what it has done for so long, family patriarch and grandfather Sir John Randolph (C. Aubrey Smith, naturally) answers John's critique with three words - “But we belong.”

John agrees to join the service because, as he explains in the film's best line, “I just got run over by an empire.” No better words exemplify C. Aubrey Smith. 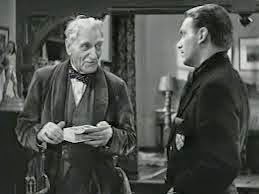 Sir John is inordinately proud of his family's service, serving England for more than 40 years. He keeps track of the various Randolph postings throughout the Empire by planting flags to mark their locations on a map in his study.

I experienced a bit of confusion in the script regarding Sir John's character. John makes reference to his grandfather's expulsion from the diplomatic corps for one small mistake, but no other mention is made of it by anyone else. Sir John seems to hold no resentment for being cashiered from the service.

But Smith is marvelous in the role, as he is in every performance. It's hard to imagine any Golden Age movie set in the British Empire that does not have Sir C. Aubrey Smith in it. His closest competitor was Sir Guy Standing, who died in 1937, so Smith owned the this particular field for the next 10 years. 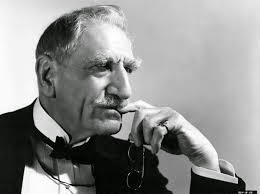 Another bit of oddity regarding Sir C. Aubrey is a short scene at a dinner party where Sir John is about to relate one of his tales of old glory until he is stopped cold by the guests, who tell him he has told that story many times before.

This could be a winking allusion to what would be one of Smith's most famous portrayals, as the old soldier who relates his exaggerated exploits at the Battle of Balaclava in THE FOUR FEATHERS (1939). THE SUN NEVER SETS was released in the United States on May 31, 1939, and THE FOUR FEATHERS had opened the previous month in England. Or it could be a coincidence.

Anyway, between his grandson's mention of an early expulsion from the service and a tale cut short at a dinner party, it's assumed he was not the most effective diplomat. It's something the film barely touches on and is not part of the film's overall ode to Empire service. But its there. I wonder if earlier drafts of the script played up this angle more? Or, with war looming, any suggestion that the Empire would get rid of valued workers over a petty incident would likely not play well with a paying audience.

Villain of the piece is Zurof (Lionel Atwill), who leads a scientific expedition studying ants and insects. It's all a front, as Zurof is digging for raw materials called, I think, something like melibium, which is an element used for bonding steel. The mine is also a front for a broadcast station which is used to ferment “organized agitation” throughout the world. Broadcasts are worldwide via a giant antennae which stays underground until put to use, when it rises out of the ground and into the sky like something out of a serial. We then see a montage of unrest in the world with acts of sabotage linked to the broadcast, such as factories being bombed, ships torpedoed and bombs falling from the sky. 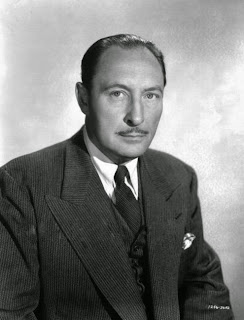 Zurof says the world is ready to be taken over. “It only takes one generation to make a dictator.” While he is not identified as German, the surname, along with a monocle he wears in several scenes, make it clear Zurof's nationality.

No one is sure of the agitator's identity, and the British government calls an emergency session to discover the broadcast's source. “We need the best minds in all our colonies” to find out where the broadcasts are coming from. 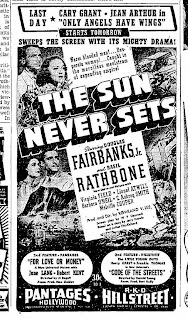 Clive Randolph is ordered back to the dangerous Gold Coast. He reluctantly accepts even though Helen is expecting their first child. John is also sent to the Gold Coast, but still resents his duty and can't see why his brother would want to subject his increasingly ill wife to the harsh African countryside.

Basil Rathbone had a stellar year in 1939, with five film appearances including his first two Sherlock Holmes movies. He made two other movies at Universal with director Rowland V. Lee that year, the historical drama TOWER OF LONDON and SON OF FRANKENSTEIN.

In THE SUN NEVER SETS, Rathbone has a good scene with Atwill when the two of them fake civility with barely hidden hostility. Those fans who enjoy their scenes together in SON OF FRANKENSTEIN (1939) will likely get an extra charge from their scene here.

In another SON OF FRANKENSTEIN echo, Clive's pressure between duty and love of wife causes him to have a brief bout of hysteria, and the scene here where he is overcome with emotion is reminiscent of his SON OF FRANKENSTEIN's hysteria scenes.

Helen is the strong one, sending Clive on his mission, telling him he's never failed the service and he's not to start now. Helen Randolph is in the best tradition of wives who selflessly let their men serve their country.

Surprisingly, the film offers little action in the first 80 minutes or so. John Randolph inadvertently becomes Zulof's dupe, and Clive gets cashiered out of the service, taking the blame for John's mistake.

But in the best Hollywood tradition, John redeems himself by learning of Zulof's true identity, and discovering the secret radio station. The underground radio station is, again, like something out of a serial and no doubt delighted the Saturday afternoon crowd. 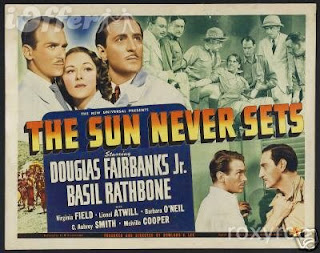 Fairbanks likely didn't think much of the film as there is no mention of it in “The Salad Days” (Doubleday, 1988), the first volume of his autobiography. (Even GREEN HELL (1940), which Fairbanks names as his worst movie, gets a mention).

To the best of my knowledge the film has never been released on VHS or DVD. I viewed the film thanks to a decades old recording taped off AMC. I remember when the film was scheduled, as I had never heard of it and was surprised when the credits came up listing all those well known names. To be sure, it's a small footnote in the careers of Rathbone and Fairbanks, but the two play well together (they were good friends off screen) and are convincing as brothers.

Barbara O'Neil delivers the film's best performance and has a terrific scene where her dangerously sick Helen, soon to give birth, practically orders her husband out of camp and to his duty. O'Neil had another film in release that year, where she played Scarlett O'Hara's mother. I won't bother with its name. She also co-starred with Rathbone that year in TOWER OF LONDON.

Its salute to the British Empire as a stabilizing source in a troubled world was a likely tonic to a nervous world holding its breath as to when conflagration would erupt. It did later that year, of course, and if its politics seem quaint today, the film offers a peek into a world where the non-existence of the British Empire was unthinkable.

For moviegoers of the first half of the twentieth century movies of valor and courage set in the British Empire were a regular staple of movie goer's diets. This blogathon celebrates the best of these and there's tons of good reading to be had. Go to http://phantomempires.weebly.com/movies/announcement-the-british-empire-blogathon for a list of titles and sites. My sincere thanks to hosts Jeff at The Stalking Moon and Clayton of Phantom Empires for allowing me to participate. 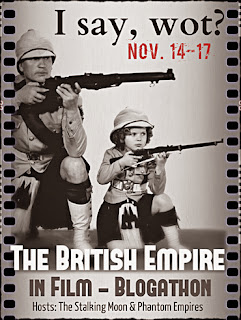 Such a great cast. I love C. Aubrey Smith in anything.

And this: "Its salute to the British Empire as a stabilizing source in a troubled world was a likely tonic to a nervous world holding its breath as to when conflagration would erupt. It did later that year, of course, and if its politics seem quaint today, the film offers a peek into a world where the non-existence of the British Empire was unthinkable." Indeed. A splendid contribution to this blogathon.

I say! Must see! Dying to see!

You have poxed my soul with a need to see this.

That said, excellent post, and thanks for joining the chorus!

Thanks to everyone for writing. I feel terrible I have not been able to read everyone's posts in the blogathon. I hope to in a day or two when things settle down. I feel like Michael Caine and Company looking at the numbers of Zulus getting ready to attack....can't wait for things to settle down. Thanks to all for their patience.

Rathbone couldn't possibly be more hysterical than he is in "Son of Frankenstein". I'm going to have to see that!

The more I see of Barbara O'Neil, the more I am impressed. I love reading about a "new" movie. Thanks, Kevin.

Now this looks like a treat! One thing I've noticed with these 'Empire' films is that, even though the film might be sub-par, the cast is always top-notch - and this is certainly no exception!

Thanks a bunch for bringing this rare but fascinating-sounding film to the blogathon, Kevin! Even if it's lacking in the action department, both the cast and the subject matter sound interesting and I hope it one day becomes more readily available to view.

Great review of the film! your description of Rathbone's descent into mild hysteria was wonderful and definitely piqued my interest. I mean, the internal debate about service to country vs. service to the family is always an interesting one - one which Rathbone does quite well, I see. I hope this pops up on AMC again, so I can see it.

Thanks again to all for writing. I feel terrible I have not had the time to read any of the other entries. I should be getting the home laptop back this weekend, and work pressures will ease next week. I'll be able to play catch up then. Thanks to all for their patience.

I've GOT to see this -- I love everybody in the cast! You review has me champing at the bit to get hold of it too! Good one, Kevin!