The World In His Arms 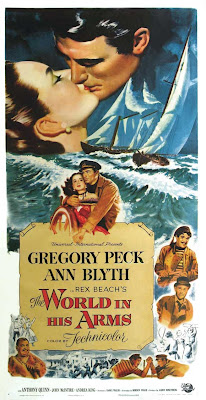 “The World in His Arms” (1952) is a rousing adventure film, the type today’s Hollywood would be completely incapable of making. Oh, they could try to make it, but they would be so insistent on giving psychological shadings to the characters, or creating elaborate back stories as to why the characters behave the way they do, that the entire enterprise would become a turgid two-and-a-half-hour bore.

Of course there’s nothing wrong with back stories, but sometimes you just want to sit back with an adventure yarn lavishly told with a strong handsome hero, a beautiful strong-willed woman, colorful supporting characters, large-scale action scenes, elaborate costumes, fabulous production design capable of creating exotic backgrounds for the story, and a lush orchestral score with a big sweeping melody sure to get the heart pumping. These elements are all front and center in “The World in his Arms”, a full-blooded adventure yarn directed by the master Raoul Walsh that uses all of its 104-mintue running time to tell an exciting story.

In this case, that exotic background I mentioned earlier is San Francisco circa 1850 and a Russian-governed Alaska territory. Gregory Peck is Sea Captain John Clark, known to everyone as “The Boston Man”, a procurer and trader of seal pelts he brings back to San Francisco from the shores of Alaska. He hatches the idea of buying the Alaska territory with his riches; not only for the territory, but to help end the cruel Russian rule of the territory. Of course there’s the beautiful Czarist Countess Maria Selanova (Ann Blyth) who he falls in love with after she disguises herself as a Barbary Coast dancing girl. She’s engaged to Prince Semyon (Carl Esmond, not as forceful as I would like), a cruel member of the nobility who tends to chop off the hands of uncooperative Eskimos in his territory.

Walsh is one of the best action directors of all time, with most of his movies brimming with lusty action and broad comedy. There’s a marvelous sequence here where Peck and Quinn race their ships from San Francisco to Alaska. We become so caught up in the action of the tall ships racing through the crashing ocean waves that we barely notice the scenes of the crew on deck filmed in front of a process screen.

The climax is memorable too, and very reminiscent of “The Adventures of Robin Hood” (1938). This time, Peck’s men disguise themselves as hooded monks to crash the wedding between the Countess and the Prince. Peck disrupts the wedding when he makes a spectacular crash through a plate glass window in the church balcony. 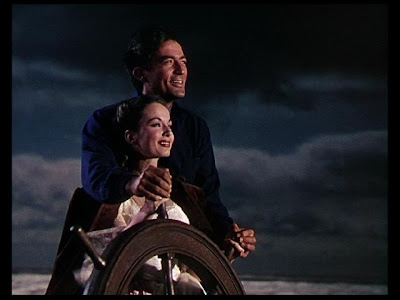 I’m sure the cast and crew had no illusions they were creating art here, and were satisfied at turning out nothing more than a rousing good time at the movies. There’s no skimping on production values here, and the score by the underrated Frank Skinner is top notch. There’s a little something for everyone. Men like the action and the women are sure to appreciate the final scene, with Captain Clark and the Countess together at the wheel of his ship, off to new adventures. As John McIntire’s character says, “He’s got the world in his arms.”
Posted by Kevin Deany at 1:48 PM