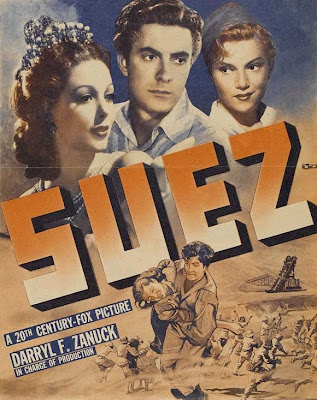 I picture Tyrone Power sitting in his bungalow on the 20th Century Fox lot, about to read his new script, when he hears through the grapevine that Fred has been assigned to the new Ty Power flick. Power blanches, and begins to furiously go through his new script to see what kind of ordeal Fred is going to put him through this time.

The Fred is Fred Sersen, one of the unsung heroes in the history of special effects. He contributed special and visual effects to many of 20th Century Fox’s top productions from the 1930s through the 1950s.

Sersen put Power through the Chicago Fire in “In Old Chicago” (1937), fighting through hordes of locusts in “Brigham Young, Frontiersman” (1940), and surviving massive earthquakes and monsoons in “The Rains Came” (1939). For the latter, Sersen won the Academy Award for Special Effects, a remarkable achievement in a year that gave us “The Wizard of Oz” and “Gone With the Wind.”

It’s easy to see why, as the effects in “The Rains Came” are still impressive today and hold up every bit as well as modern day CGI fests. Sersen later won another Oscar for a later Power film, the WWII submarine flick “Crash Dive” (1943).

One of Sersen’s most famous sequences was the amazing sandstorm sequence he created for “Suez” (1938), a highly, and I can’t stress this enough, highly fictionalized account of the building of the Suez Canal.

I’ve waited to see this title for years and thanks to the fine folks at TCM, I finally got to see it the other night. After all those years of waiting, and it turned out to be…kinda dull. It has some good moments, including that sandstorm, but, alas, suffers from that bloat that many 20th Century Fox historical epics have.

I’m all for romance, but when it overpowers the film’s main thrust, the film suffers mightily for it.

Power stars as Ferdinand de Lesseps, a French diplomat who has a dream to build the Suez Canal, linking the Mediterranean Sea with the Red Sea. Much of the movie deals with political intrigue as de Lesseps seeks to get permission from the Egyptians, French and British to realize his dream. When not arguing his case, de Lesseps must fend off the advances of two equally strong-willed women.

“Suez” is notorious for being one of the most historically inaccurate films ever made. So much so, that the de Lesseps family sued 20th Century Fox for taking too many liberties with the facts. 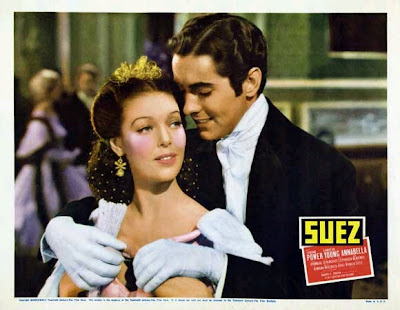 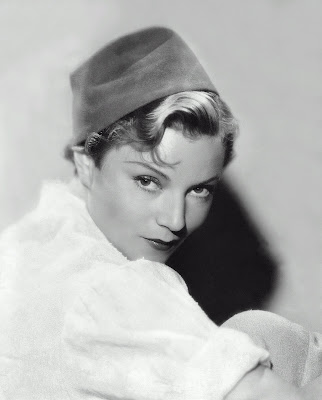 In reality, de Lesseps was a widow with four sons. And to say he looked nothing like Power would be an understatement. And, de Lesseps and Eugenie were cousins, not lovers, but I can’t remember if this was mentioned in the film. So I can see why the family may have been a little upset that their lineage is not mentioned in the film, but they should know Hollywood never lets facts stand in the way of historical romance.

However, the romantic triangle between Young, Power and Annabella is rather pedestrian, and the scenes of political wrangling over who should control the canal aren’t as interesting as they should be. Instead of bristling with all kinds of maneuverings and machinations, they’re staged here with little sense of urgency.

Director Allan Dwan has his name on many fine films, but this isn’t one of them. He does manage some lovely visuals though. There’s a brief shot of the early sun shining underneath the Arc de Triomphe which is drop dead gorgeous. The scenes of thousands of extras digging in the sand during the canal’s construction area are very impressive. Sersen no doubt helped stage an avalanche sequence where tons of rock are blown up by rebels to put a halt to the construction. 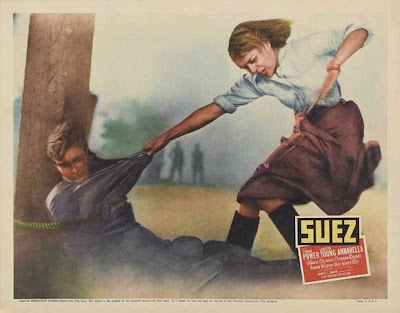 And then there’s that sandstorm. I’m sure Power was cursing a blue streak against Sersen and studio chief Darryl F. Zanuck for putting him through this sequence. It’s given a nice build up when the skies darken and de Lesseps and Toni notice a flock of birds flying through the air, far from their usual nesting places. Sure enough the winds kick up, a sand cyclone is seen approaching and for the next several minutes we’re treated to the awesome spectacle of the sandstorm blowing oceans of sand and masses of construction material through the air, as the workers scramble for shelter. What happens to one of the main characters is quite unusual for the time, proof that Hollywood did not always stick to formula.

I liked parts of “Suez” but it left me wanting more. Perhaps if there was more footage to the difficulties and challenges involved in building the canal, it would have been more rewarding. However, I was still glad to finally see it.

It did leave me wondering, though, how long Power and Annabella took to clean the sand out of every body nook, cranny, pore and orifice. Did that hasten the romance? I’ll leave that to the biographers.
Posted by Kevin Deany at 12:33 PM