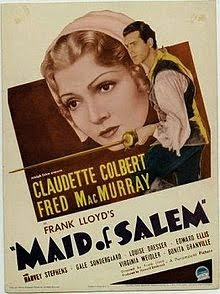 Claudette Colbert and Fred MacMurray were a very popular screen team in Hollywood’s Golden Era. They’re not as remembered as other classic screen teams, mainly because their films have not been so readily available. Almost all their films were made at Paramount, which of all the major studios, is least represented on DVD and video, and television showings were even rarer (unless its a DeMille, Preston Sturges, Marx Bros. or W.C. Fields title). You always had to hunt for Paramount oldies.

I can remember a short period in the 1970s when Channel 44, a UHF station in Chicago, showed sub par prints of movies like Alan Ladd in “Beyond Glory” (1948) and “Chicago Deadline” (1949), and yes, Colbert and MacMurray in “The Gilded Lily” (1935). They were screened once or twice before retreating into the vaults, never to be seen again. Even with the advent of home video and cable TV, many of these titles remain elusive.

Colbert and MacMurray appeared in seven movies together between 1935 and 1949. All are in the comedy or romantic comedy genre save for one, “Maid of Salem” (1937) a highly fictionalized, though engrossing, look at the Salem witch trials. 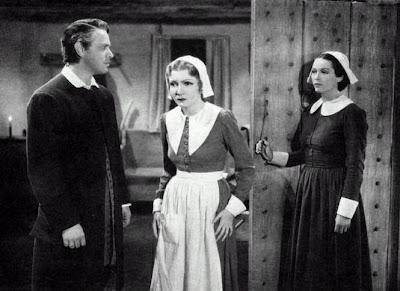 Every stern-faced extra in Hollywood was called on to portray Salem’s villagers, self-righteous Puritans who see satanic activity in every act of kindness or every smile. When Colbert’s character enjoys a nighttime rendezvous with a man in a dark cloak, the spying villagers automatically assume its Satan himself, roaming the countryside at night and trying to corrupt every God-fearing creature in sight. (Note: it’s really secret sweetheart Fred MacMurray).

No individuality is allowed in dour Salem. Colbert is called out at Sunday services for daring to wear a colorful, frilly bonnet. Director Frank Lloyd creates some interesting lighting effect here, with Colbert ablaze with light amid her fellow Puritans. In that church scene, she’s lit like Mary in “The Song of Bernadette” (1943).

“Maid of Salem” is best appreciated for its wonderful Who’s Who roster of character actors. We enjoy ripe performances by the likes of Gale Sondergaard (an ideal, repressed Puritan), Edward Ellis, Beulah Bondi, Donald Meek, E.E. Clive, Halliwell Hobbes and Russell Simpson. Sorely missed is Charles Middleton, who was born to play a stern-visaged Puritan. I wonder why he isn’t here. We also get future Bowery Boy Bennie Bartlett, Virginia Weidler and Bonita Granville. 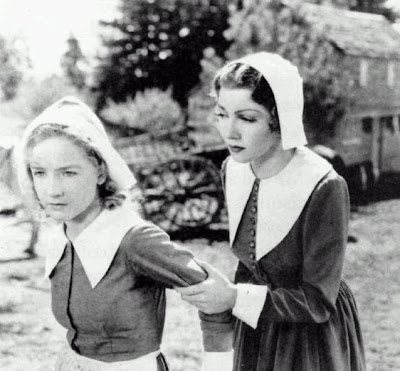 One of the most underrated performances from that era is Bonita Granville in “These Three” (1936), as a truly horrendous brat whose hateful gossip causes irreparable harm to three people. So good was she that she pretty much repeated the same performance a year later in “Maid of Salem” as one of the young Salem girls who fake attacks of possession and other maladies to draw attention to themselves (and to stave off boredom, no doubt). 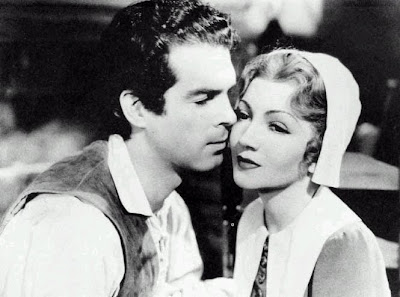 I like both Colbert and MacMurray but they’re actually the least effective part of the movie. While both had played period before, here they seem too modern, though Colbert does make the loveliest Puritan, even when facing hanging as a witch. MacMurray overacts throughout, something long time viewers of “My Three Sons” would find unimaginable.

The film’s best performance is by Madame Sul-Te-Wan as the slave Tituba, who thinks her fortune telling activities are harmless until witch hysteria sweeps Salem. She has an unforgettable scene where she can see where her interrogation is headed, starts panicking and, wild-eyed, begins naming every name she can think of.

Director Frank Lloyd is somewhat forgotten today. I wonder if there’s some resentment at his winning the Best Director Oscar in 1933 for “Cavalcade”, a Best Picture winner that is considered one of Oscar’s most ignoble. Lack of availability of much of his work doesn’t help, though his work on the magnificent sea epic “Mutiny on the Bounty” (1935) should always be treasured.

Also worth mentioning is the production design of the film, with its recreation of Salem. Hans Drier, Paramount’s ace designer, provided a wonderful village setting. It must have cost Paramount a pretty penny, as they probably thought not much use would be gotten out of it after filming was over. Movies about colonial America rarely fared well, so Hollywood was loath to make them.

“Maid of Salem” remains a worthy effort, especially considering it was produced under the watchful eye of the Hays Office. According to the Production Code, religion and religious figures should not be portrayed in a negative light. Well that’s out the window with this film, as it suggests that the repression of the Puritans and their church-based society was largely responsible for the doings at Salem.

Postscript: Speak of the devil. Just hours after I posted this, I read that the new DVD collection under the TCM Vault Series will be titled Colbert & MacMurray Romance Collection. Due on November 15, the collection will include the aforementioned "The Gilded Lily" (1935), "The Bride Comes Home" (1935) and "Family Honeymoon" (1949).
Posted by Kevin Deany at 8:24 AM

Kevin, I have never seen Maid of Salem, and would just love to. I like stories about that period, and am a big Claudette Colbert fan. What a shame those movies are withheld. I wonder why? If you ever hear of Maid of Salem showing anywhere, I'd love to know. Really good, informative post, Kevin.

Becky: "Maid of Salem" is part of a recent Claudette Colbert DVD collection. Also, with TCM slowly beginning to show more Paramount titles, I'm sure it will show up there soon. I do hope you get a chance to see it and I hope you like it.

Kevin, I saw this long ago and it's interesting to compare it to THE CRUCIBLE. I'm glad you spotlighted Bonita, who is now remembered mostly for her "Nancy Drew" B-movies. Great review!

Rick: I did think of including a CRUCIBLE reference, but I've never seen either of the film versions and it's been so long since we read the Arthur Miller play in school that I didn't feel I could make any comparisons. But in retrospect, I should have at least made a mention.