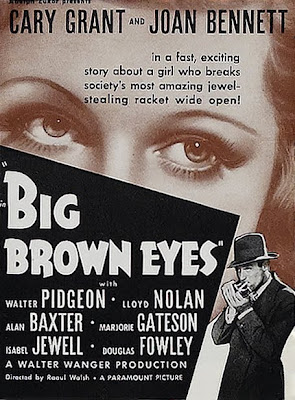 I was jolted by a scene of violence in “Big Brown Eyes” (1936). What starts out as a cute if somewhat formulaic comedy starring a sparring Cary Grant and Joan Bennett turns sour and casts a pall over the remainder of its 76-minute running time, a pall the film never quite recovers from.

Gangster/Jewel Thief Lloyd Nolan is having a discussion with fellow jewel robbers on a park bench when an argument erupts between the two parties. Two gangsters knock Nolan down and he responds by drawing a gun and firing at their fleeing selves. He misses but instead hits a baby carriage and kills the infant.

What was director and co-writer Raoul Walsh thinking?

Killing an infant seems unusually harsh to get a plot point across. Why make the victim an infant? I’m not trying to be facetious, but couldn’t an adult passerby have been killed instead?

Later on for a second or two, its fun seeing the nattily-dressed Nolan in court, casually trimming his fingernails and without a care in the world. Thanks to a fix he knows he’s going to be acquitted. But then we see the grieving mother, dressed in black, silently weeping and when the not guilty verdict is read she can barely stand and has to be helped out of the courtroom.

It just sucks all the joy out of the movie.

Cary Grant plays Detective Sergeant Danny Barr, who’s trying to crack a ring of jewel thieves. When not detecting, he’s getting a haircut and manicure at a gloriously Art Deco barber shop that reminds me of one featured in the wonderful Carole Lombard/Fred MacMurray film “Hands Across the Table” (1935). 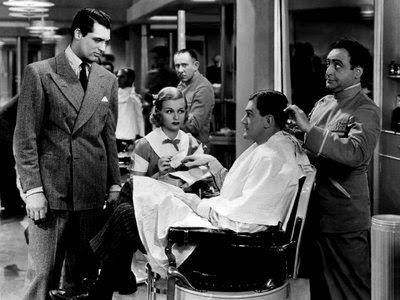 Since both films come from Paramount, it would not surprise me if the same barber shop set was used. (While the film is a Walter Wanger production, if Wanger had a distribution arrangement with Paramount, its possible Paramount let him use some of their existing sets.)

Everyone seems to hang out in the barber shop, including members of the jewel thief ring, including Benny Battle (Douglas Fowley) and his seemingly respectable boss Richard Morey (Walter Pidgeon). 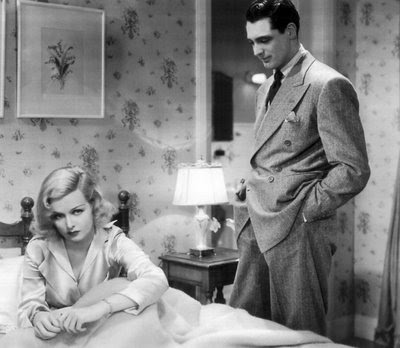 Danny and manicurist Eve Fallon (Joan Bennett) have an attraction for each other, but they seem to fight more than kiss. There’s one amusing scene where, with a door between them, Grant pretends to be romancing a woman in the hallway as Bennett listens in.

Benny Battle is attracted to Eve’s friend Bessie Blair (Isabell Jewell). (Alliteration will do that.) They meet in the park just before the shooting, so Bessie is able to I.D. Benny.

He won’t confess though, so (only in the movies) former manicurist turned crime beat reporter Eve concocts, very cleverly, a means to make Benny confess to the police and finger Lloyd Nolan.

In this movie, Cary Grant still isn’t THE Cary Grant, so he’s still in his learning stage. He does OK, I guess, but the seemingly effortless charm would come later. Still, he and Bennett work well together, though I enjoy more the other film they made together the same year, “The Wedding Present.” 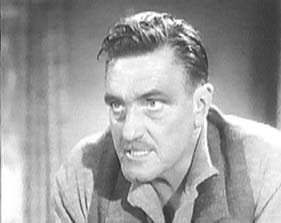 Later in the movie, one of the gangsters who intimidates Bessie looks like a very young Morris Ankrum. IMDB does not list him as being in the cast, but it sure does look like him. You may not know the name, but you would surely recognize the face. Ankrum played generals in a slew of 1950s science fiction movies and played the judge in many a Perry Mason episode.

“Big Brown Eyes” is a trifle, and no more. The baby killing scene is very unpleasant and unfortunately it’s probably the most memorable thing in the movie. Not a very auspicious quality to be remembered for.

I haven’t seen most of these so I’m looking forward to watching the rest of these. It’s always interesting to see early appearances by future stars. These titles may not be essential Cary Grant, but as a bedrock to a great career, these efforts can’t be denied. 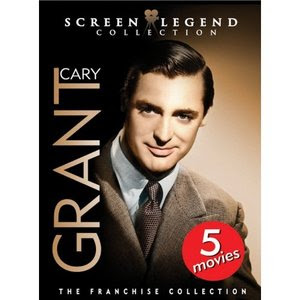 Enjoyed your thoughts on this one, Kevin. The baby killing bothered me, although I remember at the time I simultaneously was able to appreciate that -- compared to modern films -- so much horror was conveyed without a drop of blood.

The film I thought was the best of this set was THIRTY DAY PRINCESS, have you seen it yet? It's written by Preston Sturges and is sort of a forerunner of PRINCESS O'ROURKE and ROMAN HOLIDAY. I'd watched my dad's set and when the price recently dropped way down on Amazon ($14+) I felt it was worth it to buy the set for myself for that title alone. :)

Laura, Haven't seen "Thirty Day Princess" yet and didn't know about the Preston Sturges connection. I definitely have to check it out sooner than I thought.

The only two titles I've watched from the set are the two movies he made with Joan Bennett.

I will watch any film Cary Grant shows up in, but I'm way behind on his earlier and lesser known work. I haven't seen "Big Brown Eyes" or "Thirty Day Princess." I did happen to catch "Once Upon a Honeymoon" the other night - recorded on TCM. It seemed silly and I really didn't care for Cary and Ginger as a team, though they were fine together in "Monkey Business."
As for the murder of an infant, sounds like someone felt they had to hit the audience over the head to prove Nolan was 100% evil.

Hi Eve: It's been eons since I've seen "Once Upon A Honeymoon" but I remember being disappointed by it as well. Really odd movie, too, if memory serves. Still, I wouldn't mind seeing it again.

I know they wanted to paint Nolan as the bad guy, but I think they could have done something else besides killing a baby. What a downer.

I havent' seen Big Brown Eyes, Kevin, but your excellent description makes it sound like a real mish-mosh of a mess. More alliteration! I loved your remark about Bennie Battle and Bessie Blair...just think, if they married and had a daughter, they could name her Barbara Blair Battle. Try to say that one fast 3 times!

What is with the baby killing? My gosh, that is something you would see in a film with Edward G. Robinson, not one that apparently is also a romantic comedy! Actually, that is a really unusual scene for any movie in 1936!

And yes, I recognized Morris Ankrum immediately. He had the same look on his face when he played the general who lost half of his brain to aliens in This Island Earth! Really enjoyed this post, Kevin!

Thanks, Becky. I liked parts of "Big Brown Eyes" and didn't mind the mixing of genres and styles, but the baby killing scene really put me off. I know its only a movie but still.

Kevin, I'm going to hunt for this one and see it. I'd like to just to see an early Grant, but also to experience it in what we've talked about. I really love reading posts like yours that introduce me to something new and pique my interest!

Kevin, I haven't seen this movie either, but, wow, the cast is sure intriguing. The killing of the infant reminded me of the controversial scene in SABOTAGE (though it's not an infant who dies and that scene runs for several minutes). Once again, you've educated me about a film I should see. I thank you!

Kevin, having seen Morris Ankrum in LADY IN THE LAKE, I WAKE UP SCREAMING, and X: THE MAN WITH THE X-RAY EYES (among others), I too am quite sure that was indeed Ankrum himself! :-)

I was interested in seeing BIG BROWN EYES until the baby-shooting scene was described. Since I'm a mom myself, movie or TV scenes where a child is killed -- especially for no other reason than to shock the audience -- leaves a bad taste in my mouth. Sorry, but I don't care if the rest of the film turns out to be the greatest cinema achievement of all time; life is too short to endure unpleasantness for its own sake if you don't have to. But don't get me wrong, Kevin, your review itself was excellent!

Dorian, I don't have kids, but I was even thrown by this scene. I don't think I'll be returning to it too often, and I like everyone in it too. I like the rapport Cary Grant and Joan Bennett have, and it's always a pleasure to watch them...just not in this one. their other film together "The Wedding Present" I enjoyed more.