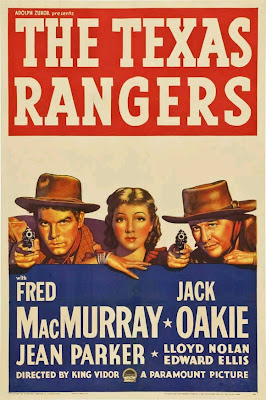 But hokum done in the best Hollywood tradition, and I don’t mean to use hokum in a pejorative sense. But was the following really drawn from Texas Rangers history?

A trio of outlaws are robbing stagecoaches in Texas. They are Jim Hawkins (Fred MacMurray), Wahoo Jones (Jack Oakie) and Sam “Polka Dot” McGee (Lloyd Nolan). Before their next holdup, they find out the stagecoach contains a Texas Ranger, a new breed of lawman determined to stamp out lawlessness. 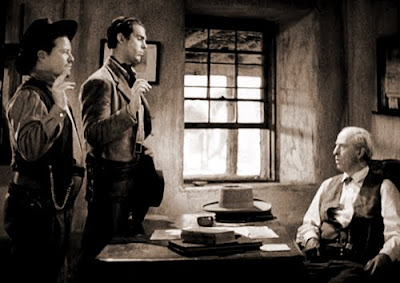 Hawkins and Jones make their way to a Ranger station and enlist with the local Ranger troop, under the command of Major Bailey (Edward Ellis).Of course, the Major has to have a beautiful daughter living with him, Amanda (Jean Parker).

Amanda and Jim take to each other immediately, even though Jim and Wahoo go forward with their plan to send messages to McGee about Ranger plans to stop the bandits. Learning the Rangers plans means McGee can plan other robberies without fear of getting caught.

But the two outlaws eventually learn to like the right side of the law and the comradeship of the Rangers. They stay with the Rangers but McGee, now known as the Polka Dot Bandit due to his polka dot scarf, has a new gang and steps up his campaign of robbing and terrorizing the populace. Guess who gets assigned the case of bringing The Polka Dot Bandit to justice?

A fairly trite story to be sure, but Vidor’s eye is as magnificent as ever. This is no back lot evocation of Texas. Rather Vidor and crew went to New Mexico to film their exteriors and the film’s very lavish action sequences. (In that pre-Internet era, a movie called “The Texas Rangers” could be filmed in New Mexico and not raise a ruckus.)

Vidor does a fine job of framing individual characters against the majestic landscapes, which look like they could swallow a man whole. 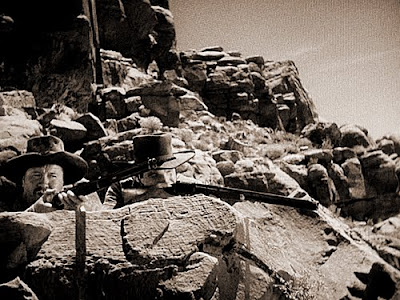 The movie is remembered for two sequences. The first is the film’s big action set piece, a terrifically exciting clash between the Rangers and the Apaches. After a fierce fight on the plains, the Apaches cleverly maneuver the surviving Rangers to hide behind some rocks on the sides of the hills. With the Rangers pinned down and surrounded by the Apaches, another group of Apaches above push huge boulders down the hill toward the trapped Rangers. The sound effects here are really impressive, as the rocks sound like giant roaring monsters racing towards the helpless Rangers. (The film earned its sole Oscar nomination for Best Sound).

I can only imagine how many kids were talking about this sequence in school the next day. Major Bailey says something like, “Only an Indian would think of a trick like that”, but I’m sure the kids in the schoolyard were saying, “That was pretty smart strategy on the part of the Indians.”

The other famous scene takes place during a dialogue scene between Nolan and Oakie, where Nolan, feigning friendship and good cheer, pulls a gun out and under the table shoots his friend Oakie in the belly. 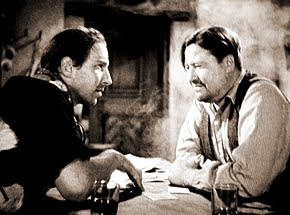 The cast can’t be beat. It’s an early role for MacMurray but he already possessed that laid-back charm which made him a favorite with audiences for several decades. Oakie is more subdued than usual, and any movie with Lloyd Nolan in it is an automatic watch. I do prefer him as the hero, or as a good bad man. Here he’s an out and out bad guy.

At the end, MacMurray and Nolan face off in gunfight and chase each other through some rock formations. The sequence looks ahead to Anthony Mann’s famous climaxes in such classics as “Winchester 73” (1950) and “The Naked Spur” (1953). As impressive as some of the Hollywood backlots are, even Hollywood’s ace production designers would be hard pressed to come up with as impressive rock formations and gullies on display here.

Paramount re-made “The Texas Rangers” in Technicolor as “Streets of Laredo” (1949) with William Holden, William Bendix and Macdonald Carey in the MacMurray, Oakie and Nolan roles, respectively. I’ve never seen it, but it’s generally considered an inferior remake. Still, its one of those maddeningly elusive Paramount titles I hope turns up on TCM. 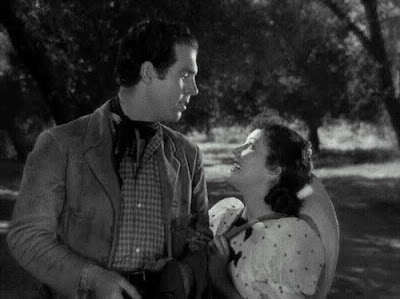 “The Texas Rangers” was a big hit with 1936 audiences, though not as big as Paramount’s other “A” western that year, DeMille’s “The Plainsman” with Gary Cooper as Wild Bill Hickok and Jean Arthur as the loveliest Calamity Jane imaginable. But I think the Rangers trumps the DeMille, since DeMille’s film features too many action scenes shot on soundstages. Looking at the two, the Vidor is, visually, by far the more spectacular.

Paramount delivered another “A” western the following year with “Wells Fargo” with Joel McCrea and Frances Dee. I’ve never seen that one but always wanted to.

It would take the magic movie year of 1939 for the major studios, by some form of cinematic mental telepathy, to release a remarkable series of big budget westerns to critical and commercial success. Warner Bros. gave us “Dodge City” and “The Oklahoma Kid”; Universal happily gave the world “Destry Rides Again”; Paramount rode the rails of success with DeMille’s “Union Pacific”; 20th Century Fox delivered the biggest hit of them all in “Jesse James” with Tyrone Power and Henry Fonda. Even Poverty Row studio Republic Pictures delivered a very respectable and fairly expensive film about Sam Houston called “Man of Conquest.” The adult western would come to fruition that year with John Ford’s classic “Stagecoach.”

These films carried the western as a reputable and profitable genre for decades to follow. 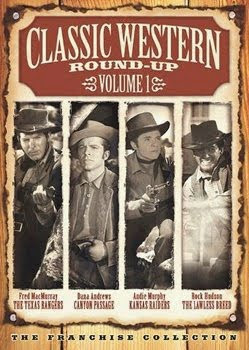 “The Texas Rangers” is available on DVD in a beautiful transfer in a four pack of westerns including “Canyon Passage” (1946) with Dana Andrews and Susan Hayward; Raoul Walsh’s “The Lawless Breed” (1953) with Rock Hudson and Julia Adams; and “Kansas Raiders” (1950) with Audie Murphy and Brian Donlevy. I purchased it for $5 at Big Lots.

And for what it’s worth, I’m picking the Rangers over the Cardinals in six games.
Posted by Kevin Deany at 12:29 PM

Kevin,
First of all Congrats to the Texas Rangers making it to the World Series. As our neighbor to the south I have to support them. : )
I really enjoyed your review and as always you threw in some fun trivia.

I wasn't aware that this was a King Vidor vehicle. I wouldn't have guessed. Also, I had no idea that Texas Ranger spawned a re-make. My dad is the lover of Westerns so I can't wait to see if he's seen it.

An excellent look back at a really good film.
Page

BTW, I tried to post a comment on your "Invisible Ray" photo review, but I'm having computer issues here at work, so I'll try from home.

I actually like that movie. What can I say?

I did not know very much about "The Texas Ranger" and I really enjoyed reading your review.. So much, that I would like to spotlight it on N and CF.

Dawn, I would be honoroed. Thank you so much.

Really enjoyed your review! I found the pacing of this film a bit sluggish, but it definitely has elements to recommend it, which you highlighted in your review. I remember that I wished MacMurray and Parker had even more scenes together, as they were quite delightful!

I agree, Nolan is always worth watching, and I love him as a good guy, or a bad guy with some redeeming qualities (grin).

What a great deal you scored on this Westerns set!!

HI Laura: I too was struck by the paucity of scenes between Parker and MacMurray. It seemed an ideal opportunity for Paramount to promote one of its up and coming leading ladies, and she's featured so prominently in the poster art.

I really did enjoy the location shooting on this title though.

Yep, you can get some pretty good deals on DVDs at Big Lots.

It's funny you should mention that comparison to "Winchester '73". With both movies, it was on second or third viewings that I was suddenly struck by how beautifully they were filmed. Part of the glory of watching westerns.

"Streets of Laredo" is not a bad film. The best thing about it in my view is MacDonald Carey in the Nolan role. He'll surprise you.

CW: Good to know "Streets of Laredo." There are so many of those Paramount era titles I'm dying to see. Maybe one day.

Kevin,
I've fixed my comment settings! I do apologize for that.

Hope you're having a great weekend with a great film on your schedule.
Page

Kevin, I'm not as big a western fan as you, but you named some good ones -- Dodge City is probably my favorite (love the bar fight in that one), Jesse James, Destry -- all really good. I haven't seen this one, but the cast looks very good. I'll keep my eye out for it!

Becky, October is usually my month to watch lots of horror movies, but for some reason I've been watching more westerns of late. Since the economic news seems to get more depressing each day, westerns are like comfort food to me.

Yep, "Dodge City" is pretty great and I have NO problem accepting Errol Flynn as a western hero.

Just another movie I need to get around seeing -- sounds like a fine yarn. And of course it's based on true history, just like They Died With Their Boots On.

Yep,"They Died with Their Boots On' is lousy history, but exemplary movie- and myth-making.