Hollywood Bad Boy Behavior: Not as a Stranger

An unexpected burst of writing assignments have kept me busy of late…too busy to blog alas. But I wanted to put something up and having recently read, and enjoyed Lee Server’s superb Robert Mitchum biography “Baby I Don’t Care” (St.Martin’s Press, 2001), I wanted to do something regarding this book. (I also recommend Server’s biography on Ava Gardner titled  “Love Is Nothing.” They’re two of the best movie star biographies I’ve ever read. They come with my highest recommendation).

One excerpt from the Mitchum biography had me shaking my head and laughing for days. I don’t mean to condone drunken behavior here, but this could be my favorite example of Hollywood bad boy drunken behavior I’ve ever read. For sure, it’s a good thing TMZ was not around circa 1955 when Producer/Director Stanley Kramer was filming the medical soap opera drama “Not as a Stranger”. Taken directly from Server’s book, I hope you enjoy it. 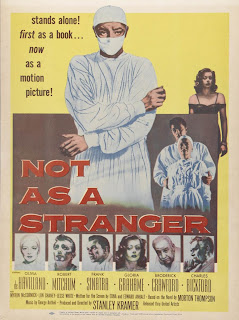 But Mitchum and his colleagues were not quite ready to take the Hippocratic Oath, as they proved soon after the hospital training period ended and filming of Not as a Stranger began. Kramer has unwittingly loaded the picture with a number of Hollywood’s most ferocious drinkers. “Mitchum, Sinatra, Brod Crawford, Lee Marvin – every one a teetotaler!” said Ed Anhalt, gleefully recalling the well-lubricated cast. “Myron McCormick? Broadway actor played the anesthesiologist in the picture? He’d fall asleep during a take, wake up screaming, and fall off the set! I’m very fond of Stanley, but he was a good boy, didn’t drink, and…Stanley had no idea what he was getting into with this mob.”

“It wasn’t a cast so much as a brewery,” said Robert Mitchum. The tipping would begin early, and by late afternoon the sets at the California Studios would become a full-blown bacchanal. Fights with fists and food, erupted at a moment’s notice. One day the gang toppled a trailer. On another occasion they broke through the side of a dressing room. Telephones were ripped from the walls. It reminded Stanley Kramer of that picture he had produced about the motorcycle gang taking over the town, only that time the gang was working from a script and he could count on a happy ending. 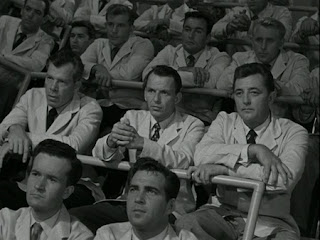 One day Broderick Crawford went berserk. The scrawny but fearless Frank Sinatra enjoyed needling the huge, powerful Crawford, likening the actor to the retarded character, Lenny, in Of Mice and Men. “He could be mean, Sinatra,” said Anhalt. “Why he was so mean to Brod, I don’t know. And you didn’t want to make Brod lose his temper if you had any sense.” Crawford – Mitchum called him “the Crawdad” – took all the needling her could stand one day and attacked Sinatra, holding him down, tearing off his hairpiece and…eating it. Someone screamed, “My God, Crawford’s eaten Sinatra’s wig!”
“Mitchum tried to pull them apart,” said Anhalt. “He liked Brod, and he liked Sinatra, too. And like the Good Samaritan he ended up getting socked for his troubles. And Sinatra took off, disappeared, having instigated the whole thing. So Mitchum’s fighting with Brod, and Brod throws him through the window onto the balcony outside. Mitchum was big and strong, but Brod was even bigger.”

The Academy Award-winning Crawford began choking on the fake hair he had ingested. Someone ran in with technical adviser Dr. Maxwell, and they attempted to make Crawford vomit the hair clump up. Anhalt said, “I don’t know whether they were trying to save him or save the hairpiece, because it was the only one they had. Anyway, it was mangled and they couldn’t use it, so filming had to be postponed for I don’t know how long, until Sinatra could be fitted for a new toup.”

At the end of one exhausting day – blissfully without incident – Kramer dismissed the cast with a polite request: “Tomorrow morning we shoot one of the most difficult scenes in the picture and I want you all clear-eyed and no hangovers. Please…everybody promise me you’ll go straight home now and get a good night’s sleep.” They promised. Kramer stayed late working with the film editor, then wearily got into his car and headed for home. He stopped at a red light on a seedy corner not far from the LaBrea studio and saw a violent commotion outside a bar. He blinked a few times before he realized what he was looking at. It was three, no, four members of his cast, one of them lying sprawled on the asphalt, two in a ferocious fistfight. The light turned green and so did Kramer, cursing to himself and laughing mirthlessly; he drove on and didn’t look back.

I hope to have another blog up before my participation in the James Cagney blogathon, hosted by the inimitable R.D Finch over at the Movie Projector. You can visit his site at http://themovieprojector.blogspot.com/ for a list of dates and films to be covered. On April 10, I’ll be writing about the first two films in the famed James Cagney and Pat O’Brien screen partnership “Here Comes the Navy” (1934) and “Devil Dogs of the Air” (1935). There will also be an opportunity for a lucky person to win a copy of the special edition of “Yankee Doodle Dandy” (1942), featuring Cagney in his Academy Award-winning portrayal of George M. Cohan. It looks to be a great blogathon toasting one of Hollywood’s greatest legends and I’m honored to be a part of it. 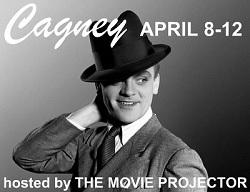 Kevin, I'll have an entirely new perspective the next time I watch "Not as a Stranger." If only the scuffle in which Crawford devoured Sinatra's toupee had been caught on film. Today, 20 people would've gotten it all on their smartphones and instantly to CNN, viral on the internet, etc.

A few years ago when I spent time at TCM's fan site, the Classic Film Union, I got to know a man named Frank (can't remember his last name) who had been a PR guy for one of the studios for years. He told the hair-raising tale of a press junket he was on with Robert Mitchum. He considered Mitchum's wife a saint (I think he referred to her as "Saint Dorothy") since it was only because of her, he said, that Mitchum showed up anywhere at all and was ever sober. He liked Mitchum but said he was regularly an unmanageable hellion.

Eve,that's an interesting story about Mitchum. In the Server bio, there's a hilarious account of Dorothy paying a surprise visit to Mitchum on the set of, I think "Thunder Road." Mitchum woke up and saw a strange woman in his bed and sneaked out the back window, because he didn't want Dorothy finding him in bed with another woman.

When he returned, Dorothy wanted to know where he was, as she got to the set early and wanted to surprise him and climbed into bed with him.

Unfortunately he could be a mean drunk and threw a basketball at the head of a young female reporter who was sent to interview him for "That Championship Season." It was that event that convinced him to enter the Betty Ford Clinic.

I remember a "Good Morning America" interview afterwards and David Hartman kept pressing Mitchum about his stay there and how he was doing. Mitchum wanted no part of it, and just kept saying he was fine. Eventually Hartman got the hint and moved on.

Still, for all his foibles, one of my favorite actors, who I happily watch in anything.

Well, I will never look at "Not As a Stranger" the same way again!!

I'm not sure why Frank Sinatra (skinny as he was) would ever have wanted to tangle with Broderick Crawford. I know I wouldn't want to get into a scuffle with him.

I bet all those guys were hellions in their high school classrooms.

Some wild stories here - especially the one about Mitchum eating Sinatra's hairpiece! Who knew!

Patti, hellions indeed. I remember reading that best friends Broderick Crawford and Lon Chaney Jr. used to have some massive tussles when they were working together at Universal. We're talking mass set destruction.

Silverscreenings, actually it was Broderick Crawford who ate the toupee, not Mitchum. Though perhaps they were all so drunk, no one knew who was hitting who and who was eating the toupee.

My god, all the flying testosterone!

I've heard the story about Crawford & Chaney deliberately getting drunk and fighting and smashing sets and dressing rooms. (It's a wonder they ever completed any films.) 'Not As A Stranger' is something of a hoot to watch as it is, and now I will have some more background to bring to re-watching it, which I think will enhance the occasion. Thanks for posting!