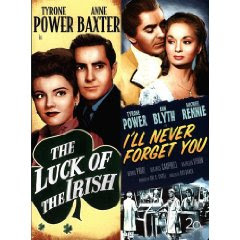 I’m a sucker for time travel movies, so I was a little surprised that I didn’t enjoy “I’ll Never Forget You” (1951) more than I did. Oh I liked it well enough and it’s worth watching, but it just didn’t hook me. Part of it may be due to, for me, a curiously lackluster performance by star Tyrone Power.

But there’s much to enjoy here, especially if one is a fan of classic horror movies. The film’s source material is the play “Berkeley Square” by John L. Balderston. Balderston was a successful playwright who became a top Hollywood screenplay writer in the 1930s, enjoying spectacular success in horror movies, both as a screenplay writer and as an adaptor. His credits include: “Dracula” (1930), “Frankenstein” (1931), “The Mummy” (1932), “The Bride of Frankenstein” (1935), “Mad Love” (1935) and “Dracula’s Daughter” (1936), among others. Not too shabby a list.

The film’s director is Roy Ward Baker, well known for his British horror movies such as “The Vampire Lovers” (1970), “Dr. Jekyll and Sister Hyde” (1971), a much better film than the title indicates, and the superior Amicus anthology film “Asylum” (1972). Baker also directed the best Titanic movie to date “A Night to Remember” (1958).

However, this was an early credit for Mr. Baker and I’m afraid his inexperience shows. Everyone is a little too passive, a little too subdued. It’s almost as if Baker and the cast were unwilling to completely wrap their arms around the film’s premise. 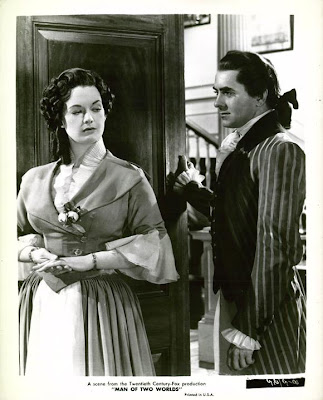 Tyrone Power plays an atomic scientist living in a beautiful old ancestral house in London. He’s also obsessed with the 18th century and thanks to his experiments, believes time travel is possible. He has memorized the history of his house and his relatives who resided there. One evening during a tremendous storm he’s struck by lightning and finds himself back in the 1780s as his ancestor. He knows far too much about everyone’s lives and is prone to making wild predictions about the future. Some fear he is in league with otherwordly forces, while others find him a rival. Helen (Ann Blyth) falls in love with him, despite Power’s character being engaged to her sister.

The film opens in black and white for the contemporary London scenes and then switches to Technicolor for the period scenes – a nice touch. But for someone who is obsessed with the past as much as Power’s character is, he doesn’t seem to relish being there. I like Power tremendously as an actor, but I think this is one of his weakest performances. However, he does register strongly in his love scenes with Blyth – those scenes are among the film’s best. 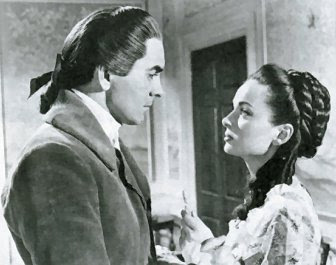 There’s an odd scene where Power invites Blyth to look deep into his eyes so she can see all the sights from his time. She breathlessly recites everything she sees – the tall buildings, automobiles, airplanes, etc. – and wonders why he would want to leave such a world. It’s a very well-written scene and I suspect it comes from the play. But none of these sights are shown. Likely effective on the stage, this is one scene where the medium of film could have been used to strengthen the scene.

Power does return to the present – back to black and white - and his visit to the graveyard to visit Helen’s grave is helped enormously by William Alwyn’s ethereal scoring and some evocative lighting effects. We also learn that Power has been acting very strangely the past month. Did the lightning strike really send him back 200 years? Or did it cause him to imagine the whole thing?

I applaud the ambiguity and have the feeling that Baker and company were trying very hard to do something different. They didn’t quite make it, but kudos to them for trying.

The film was originally made in 1933 under its original title “Berkeley Square.” Directed by Frank Lloyd, it starred Leslie Howard and Heather Angel and remains frustratingly elusive to see. I hope to see it some day.
Posted by Kevin Deany at 9:44 AM

Nice review and I agree wholeheartedly, Kevin. It's an interesting film, but not as strong as it have been. Other time travel romances work better (SOMEWHERE IN TIME, even the romance in TIME AFTER TIME). I'd also like to see Leslie's version.

Thanks, Rick. I really wanted to like it, but it just didn't grab me. I'll be happy to give it another shot down the road though.