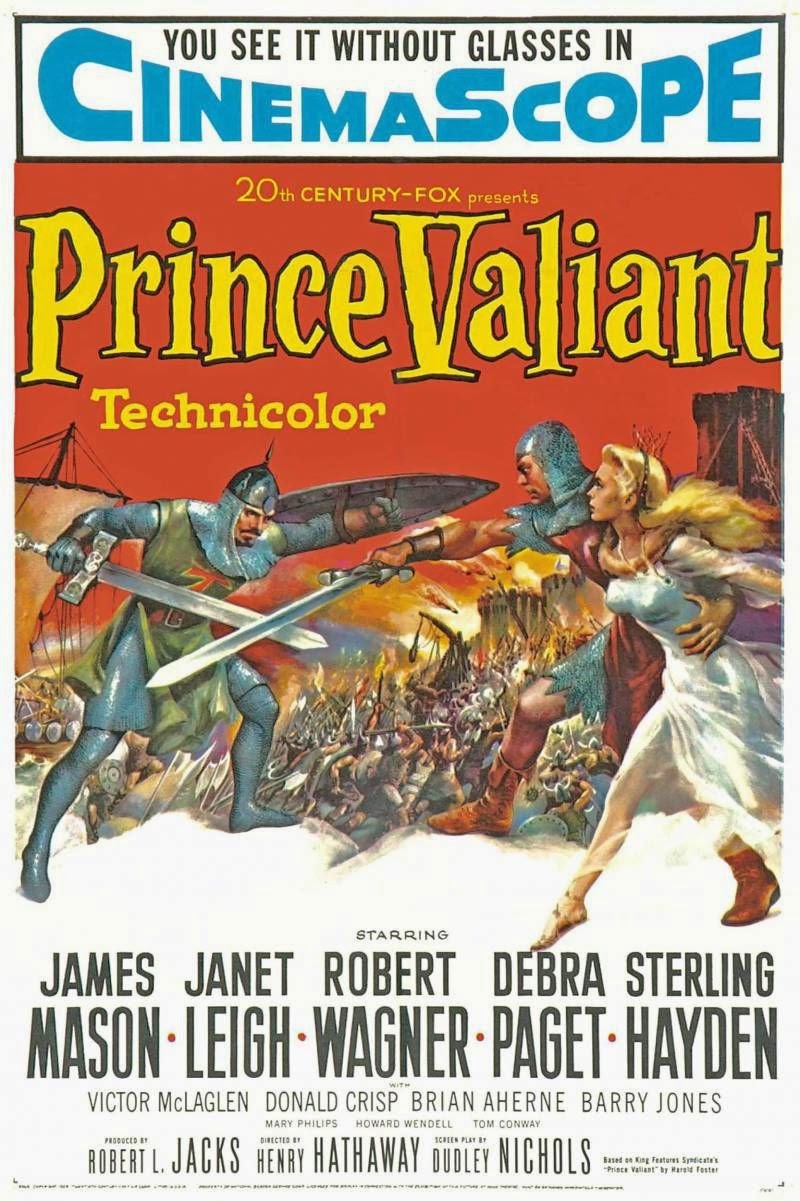 Comfort movies. I guess everyone has a different definition of what a comfort movie is. For me, a comfort movie is a very personal one, a movie you really enjoy and watch whenever it is on TV or you watch the DVD more than other movies in your collection.

That love may not be shared by others.

I'm not necessarily talking about favorite movies beloved by millions like CASABLANCA (1942) or SINGIN' IN THE RAIN (1952).

No, what I mean are those movies that you and you alone seem to adore. The kind where  you eagerly share with others, but when the movie is over an embarrassed silence engulfs the room.

Maybe comfort movie isn't the right term, but it will do for now. I know quite a few people who can quote  from the THE GODFATHER movies at the drop of a hat. Again, I'm not talking about universally beloved movies, but one's own very personal favorites.

I have friends who have their own comfort movies. One friend unreservedly loves MR. DESTINY (1990) with Jim Belushi, while another worships at the altar of MYSTERY, ALASKA (1999), the Russell Crowe hockey movie. I enjoyed both of them but not to the extent they do. But there is some intangible thing about those movies they respond to. I get that. I may not share it with those particular titles, but I totally understand where they are coming from.

There will be occasional looks at favorite comfort movies of mine. Movies that make me just as happy to think about as to watch, opinions not shared by many others, but that does not stop me from adoring each of these movies without reservation. (Note, these will not be critical evaluations). There may be some slight spoilers ahead.

One of 20th Century Fox's first Cinemascope adventure films, PRINCE VALIANT (1954) ranks among my all-time favorite swashbucklers. Not only is it one of the most enjoyable swashbucklers ever made, but I think it is one of the best comic strip/comic book adaptations ever. Some of the images and scenes were copied right from Hal Foster's celebrated comic strip chronicling the adventures of the young Viking prince, and they're a joy to behold. For me, its one of the few movies that captures the exuberance and excitement of the comics medium.

Some friends I've shown it to do not share my appreciation of the film, and found it pretty juvenile. For one, they could not get past star Robert Wagner's wig in the film. (Wagner agrees with them, calling it his Bette Davis look). But you can't do a Prince Valiant film without that famous Valiant hairstyle and trying to do so is like making a Superman movie without the iconic costume) 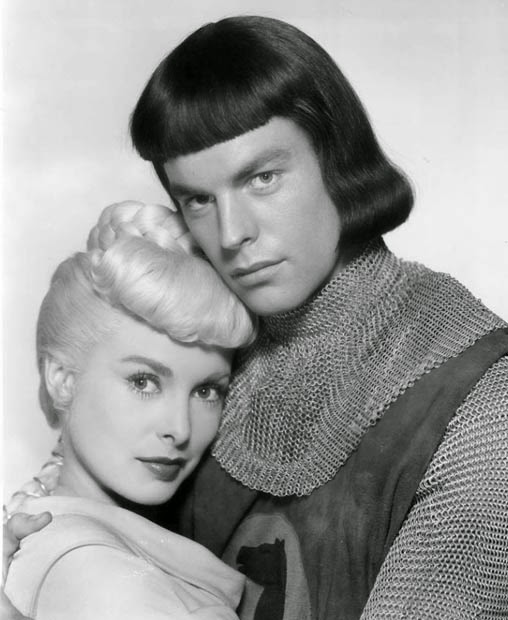 It doesn't bother me at all, and neither does Wagner's portrayal. The Valiant of the film is young, callow and very green. He's all exuberance, giving little thought to the consequences of his actions. Wagner does a great job of promoting Valiant's immaturity while still being very likable. That's harder than it sounds.

Sterling Hayden as Sir Gawain is also a tough swallow for many, but the big lug is very appealing. It may not be his best performance, but I'm hard pressed to think of one that is so likable. True, I guess a Knight of the Round Table should not be thought of as a lug, but that's how Hayden plays him.

Love interest is delivered by Janet Leigh and Debra Paget, two of the loveliest medieval princesses one could imagine. This is the movie that began my life-long infatuation with Debra Paget. (Shameless name dropping: Years ago I met Janet Leigh at a book signing years and told her how much I like this film. She said she read the Prince Valiant comic strip growing up, and was thrilled to be cast in the movie.) 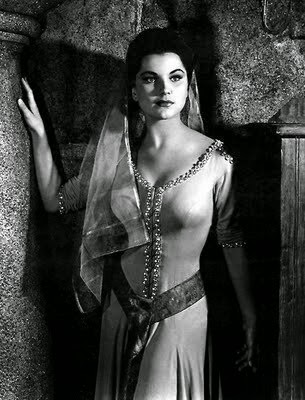 James Mason is Sir Brack, a Knight of the Round Table who is also the Black Knight, a mysterious figure who allies with the pagan Vikings to overthrow King Arthur's Camelot. He's great as always, with his marvelously plummy voice contrasting nicely with Wagner's. I've always been intrigued by his  appearance here. He likely considered it slumming, as movies adapted from comic strips and comic books were mainly the purview of Saturday afternoon serials. Over the last several decades, it's become routine for celebrated actors like Gene Hackman and Anthony Hopkins to appear in comic book movies, but back then James Mason's appearance in one must have been an eyebrow raiser for many. I think he's great in it, a pure pleasure to watch. What a year he had in 1954, what with two of his most famous performances, in A STAR IS BORN and 20,000 LEAGUES UNDER THE SEA.

But the real star of the movie may be composer Franz Waxman, who delivered one of the most gloriously exuberant scores in motion picture history. Why it isn't more celebrated I'll never know, because it's pure joy from beginning to end. There's a short sequence where Valiant is escaping from a seaside prison by undoing the bars on a window. Using a rope made from a mattress spring he uses it to scale the walls and escape. Waxman gives us a stunning piece of music during the 120-second or so sequence which delivers more orchestral color, drama and suspense than anything I've heard at the movies over the last 10 years.

The final broadsword duel between Valiant and Sir Brack is one of the best in moviedom, with the broadswords making enormous clanging sounds as each tries to outfight the other. Waxman leaves the sequence unscored save towards the end, when Valiant begins getting the better of his nemesis. Waxman introduces a very ethereal, high pitched, slow treatment of his main Prince Valiant theme, played on, of all things, an electric violin, subliminally implying that now is the moment when Prince Valiant has ceased to be a boy and has become a man. It's a beautifully scored scene, working on both a dramatic and musical level.

The final scene sees Prince Valiant knighted Sir Valiant for his service to King Arthur. It's a great pity there was never a sequel called SIR VALIANT. But what we have here is one of the most wonderfully entertaining swashbucklers of all time.

One of the best studies of the swashbuckling genre is the book “Swordsmen of the Screen: From Douglas Fairbanks to Michael York” by Jeffrey Richards (Routledge & Kegan Paul Ltd, 1977). Richards shares my enthusiasm for the film and provides some very interesting production background:

“The rights to the strip were purchased by MGM who for two years tried and failed to get it into script form. Eventually they sold the rights to 20th Century Fox and producer Robert Jacks, enthusiastic about the project, decided to go directly to the strip for inspiration. 23,980 drawings were made available to screenwriter Dudley Nichols and from them he fashioned a dramatic and exciting script. Fox then assigned a budget of 3 million dollars and assembled a talented team of artists to bring the script to life: cinematographer Lucien Ballard, composer Franz Waxman and ace action director Henry Hathaway. Nine weeks of location shooting in Britain produced some superb footage of Caernarvon, Warwick, Braemar and Eilean Donan castles, with Ainwick standing in as Camelot and the Scottish village of Dornie transformed into a Viking settlement. Back in Hollywood, Sligon's castle was constructed at the Fox studios and for several days a Viking fleet was to be seen sailing off the Pacific coast, so that exteriors for the film could be completed.

“Tableau-style ceremonial, hieratic groupings and deliberately posed medium and long-shot dialogue scenes are the entirely appropriate hallmarks of Henry Hathaway's direction, conveying without effort the ritual and mythic elements of the story. But the film is punctuated by all-stops-out, no-holds-barred action sequences, handled by veteran stunt director Richard Talmadge, with a full complement of Hollywood stuntmen, half of whom were injured in one way or another during the course of the picture. (Fencing Instructor) Jean Heremans coached Robert Wagner in sword-fighting and helped stage the fencing sequences. Henry Hathaway paid tribute to his expertise when he described the character of Valiant as a “combination of D'Artagnan, Doug Fairbanks Sr., Tarzan, Robin Hood, Jim Bowie, William Tell and Jean Heremans.'”

You can have your dopey Dark Knight movies or the beyond wretched MAN OF STEEL (2013). For me PRINCE VALIANT ranks among the best comic strip movies ever. It's a fun, exhilarating movie that doesn't have a dull moment and is chock full of speed, romance and action. I don't care if others don't respond to it. PRINCE VALIANT is one movie I never get tired watching.

Off the top of my head, I can think of other comfort movies I can write about, such as John Wayne in BIG JAKE (1971), Charles Bronson and Jill Ireland in BREAKHEART PASS (1976), WWII all-star musicals THANK YOUR LUCKY STARS (1943) and (despite an aversion to Betty Hutton) STAR SPANGLED RHYTHM (1942), Jon Hall and Maria Montez in ALI BABA AND THE FORTY THIEVES (1944). So many wonderful movies....even if I sometimes feel I'm the only one who thinks so.

What are some of  your favorite comfort movies?
Posted by Kevin Deany at 2:07 PM

Great post! I love that film, too, and like you I was a big fan of the classic comic strip. Your post reminds me that I need to sit down and watch this one again soon.

Thanks, Jennifer. I must admit, writing about it, I was thinking to myself, I would love to see this one again. The DVD transfer is problematic in spots, but more than watchable.

You're right about Robert Wagner's wig--but also the rest of the movie. It's entertaining, the stars are attractive, and it's true in spirit to its literary origin.

Great point - "Over the last several decades, it's become routine for celebrated actors like Gene Hackman and Anthony Hopkins to appear in comic book movies, but back then James Mason's appearance in one must have been an eyebrow raiser for many."

I've never seen the movie, or at least, never really paid attention when it was on. I loved the comic strip when I was a kid, though. I love your enthusiasm for it.

Off the top of my head, I can't think of any specific comfort movies I watch that aren't pretty well known by old movie buffs - Like BEST YEARS OF OUR LIVES, which I watch probably at least once a year, or the usual round of Christmas movies whose dialogue I know by heart.

I have not seen "Prince Valiant" since I was about 12-years-old. It has faded in my memory, but that memory is fond. Your enthusiasm is contagious!

My comfort movie list would include: Bend of the River, The Thing from Another World, Life With Father and "my" Charlie Chans.

I have quite a few movies that would fall into this category. In some ways I think movies can be more enjoyable the second (and third and fourth) times through, once you know where things are going. Then you can just enjoy the individual moments without focusing on plot. Anyway, a couple that pop to mind are the most recent version of Pride and Prejudice (visually it's just tremendous) and No Highway in the Sky.

Rick and Jacqueline, my library has some collections of the old Prince Valiant comic strips in book form, and they are stunning. I can see why they were so popular.

CW, those are some of my favorites as well, especially the Chans.. and BEND OF THE RIVER...and THE THING. I haven't seen LIFE WITH FATHER in years, but remember really enjoying it.

Patrick, major props for mentioning NO HIGHWAY IN THE SKY. What a gem that movie is.