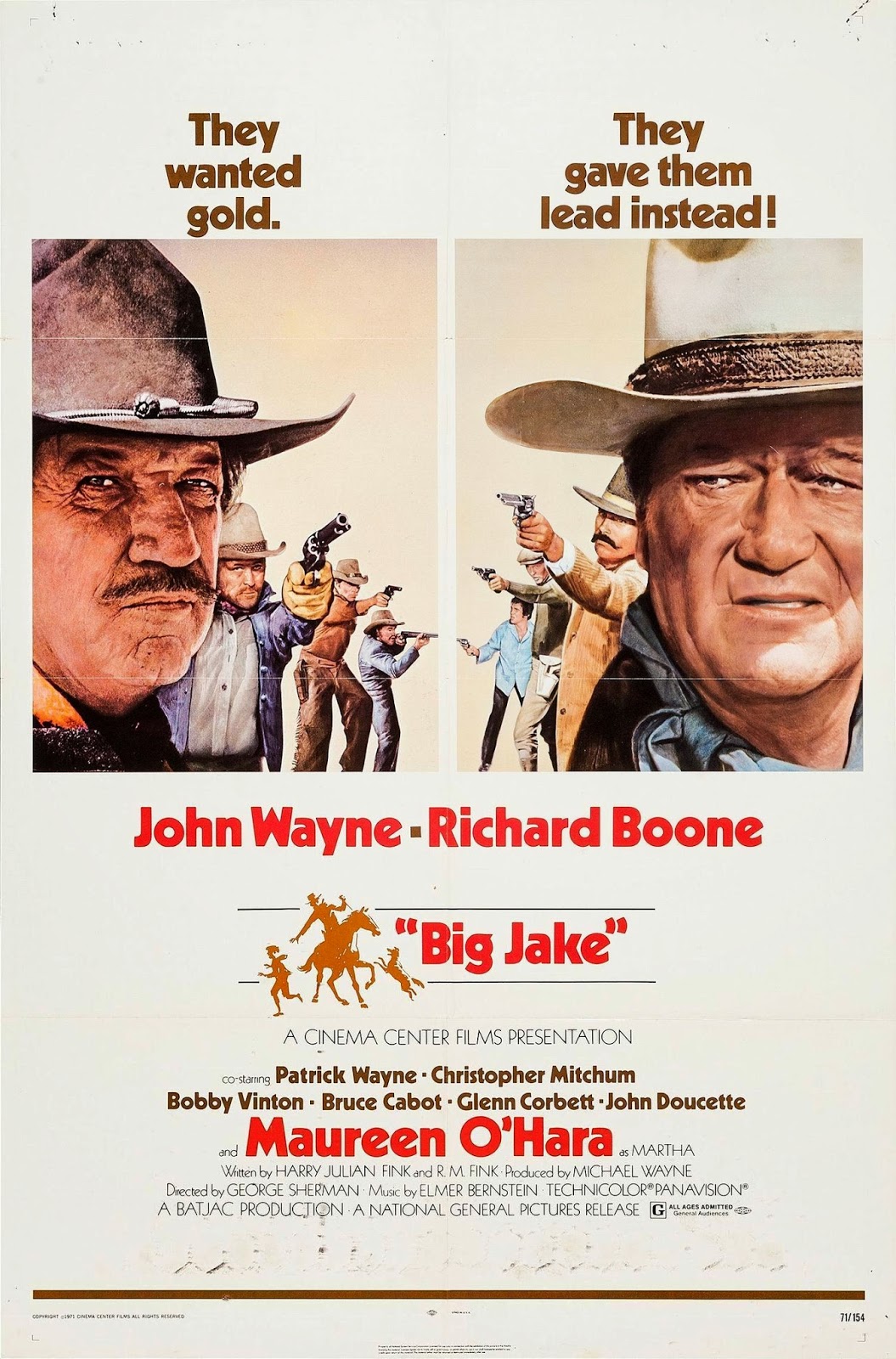 BIG JAKE (1971) is probably my favorite John Wayne western. Not his best, mind you, but my favorite. I've seen it countless times and will happily sit down and watch it a dozen more times. While I'm not blind to the film's faults, for me they are minimal and don't hamper my enjoyment of the film.

I was nine years old when I saw my first John Wayne movie, BIG JAKE, at the theater and that may be one of the reasons I like it so much. I remember being very impressed by this towering authority figure who travels to Mexico to retrieve his kidnapped grandson from the clutches of a ruthless outlaw gang led by John Fain (Richard Boone).

I've written before about that viewing that night at the Dolton Theater, my home away from home growing up. The place was packed on that summer evening and the theater was obviously loaded with John Wayne fans. When that freeze frame appeared at the end and the triumphant Elmer Bernstein score kicked in to herald the end credits, the applause and cheering was long and sustained. I remember it to this day. I think I was one of those louder participants. 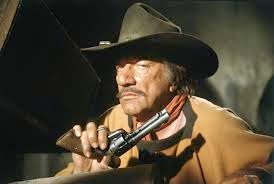 I love the many dialogue exchanges between Wayne and Boone. Here are two men who would kill each other at the drop of a hat, but I believe have a grudging respect for each other. The film was written by Harry Julian Fink and Rita M. Fink, who also wrote DIRTY HARRY that year. I can easily imagine Dirty Harry saying some Big Jake's dialogue and vice versa. The film is loaded with endlessly quotable dialogue.

The one scene between Wayne and Maureen O'Hara, in what proved to be the last of their five films together, is a testament to movie star mystique.  Wayne greets estranged wife O'Hara and the look that passes between them says more than pages of dialogue could. If one had never seen a John Wayne/Maureen O'Hara movie before, the scene plays beautifully, with the two anxious to secure their grandson's freedom. But for movie fans who have long enjoyed their previous films together the scene has added resonance. However you see it, it plays beautifully on both levels.

As I've gotten older, I've grown to appreciate the many familiar faces in the cast. Old-time western fans  who watched hundreds of westerns in the past likely silently cheered each time a favorite face showed up: John Agar, Harry Carey, Jr., Glenn Corbett, Jim Davis, John Doucette, Gregg Palmer and Hank Worden. Just typing all of those names makes me very happy.

BEWITCHED's Dr. Bombay himself, Bernard Fox, has a good scene as a shepherd about to be hung before being saved by Big Jake.

Wayne has one of his all-time best introductory scenes here, with a great close up of him taking aim at the aforementioned lynching party. He's decides not to butt in, until one of the lynchers hits a little boy. That's enough for Wayne to ride down and confront lynch leader Jim Davis. 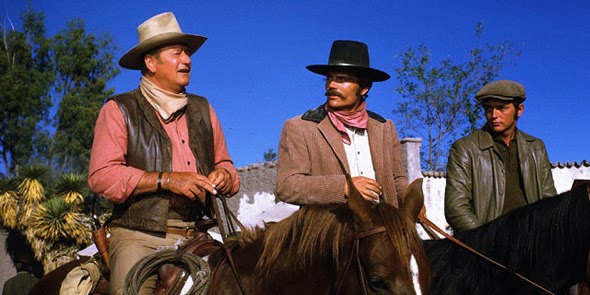 Patrick Wayne (Duke's son) and Christoper Mitchum (Robert's son) are both every appealing as his estranged sons who join their father in the trek down to Mexico. Jake's best friend is an Indian, Sam Sharpnose (Bruce Cabot), who accompanies the trio as well. Also tagging along is Wayne's dog, which he simply calls Dog. (Was this an homage to Wayne's great HONDO (1953)? If memory serves, he calls his dog in that movie Dog as well).

Anti-P.C. Rant – I love how Wayne's best friend in the movie is a Native American, which gives no credence to the belief held by many that Wayne's movies are filled with anti-Native American bigotry.  Some may wince at a Native American being played by Bruce Cabot. Wayne would have scoffed at that. Bruce Cabot was a long-standing friend and Wayne loved working with his buddies. Cabot needed the work and Wayne was happy to oblige. Helping out a friend was much more important to Wayne than being politically correct. It was one of Cabot's last films. He died the following year.

If there are some faults to find with the film,  it's we never find out why Wayne left his family years ago. Sam and Dog are both killed in the final shoot out and I wish there had been a scene – heck, even a line of dialogue would have sufficed – where Jake is regretful about the losses.

But the shootouts are beautifully staged, the scenery on the trek to Mexico is to die for, and the comedy   bits are well played. Elmer Bernstein contributes one of his most infectious scores and the whole thing is a blast from beginning to end. It's one of my all time favorites.

After I saw it for the firs time, I remember asking my dad about this Wayne guy and he told me he's been in movies forever, and they showed up on TV all the time (even in the early 1970s this was true). A few weeks later a local station advertised THE FIGHTING KENTUCKIAN (1949) on the 10:30 movie. Since Wayne was in it I wanted to see it and to my delight there was Oliver Hardy in the movie. I had been a Laurel and Hardy fan for as long as I could remember but didn't know he was going to be in it. It was like a whole world was opening up before me. I couldn't wait to see what else it revealed.

Nice post, Kevin! While BIG JAKE doesn't carry quite the resonance for me as it does you, I do enjoy the film very much, especially the great supporting cast and the Duke looming large and in charge. I totally agree with you about the lack of even one second of remorse for the death of McCandles' dog and friend Sam at the climax (this sort of thing is always a major pet peeve of mine in movies...lazy screenwriting
...or a victim of editing?)

Something you didn't mention was just how nasty and violent the opening of the film is, as Boone's crew (an especially nasty, unkempt bunch) wipe out a whole bunch of innocent people at the McCandles' ranch. This sadistic edge runs throughout the film, despite its overall jaunty tone, and works as an effective way to remind viewers just what a pack of total murderous scumbags Wayne and sons are dealing with.

Jeff, it is a pretty violent movie isn't it. Probably up there with THE COWBOYS as the Duke's most violent.

But those opening scenes are very effective, you're right. These are a mean group of men and we are glad to see Jake and Sons take them on. You can tell its a 1970s movie as the blood looks like red paint.

The lack of remorse over Sam and Dog's death is my major peeve with the movie. While George Sherman is credited as the director, its rumored Wayne directed large chunks of it. I wonder if something was left out of the editing.

I must ask you what my daughter always asks me when I am basking in the glow of "Bend of the River". How many people have to get shot before you are comforted?

I love the way you said just typing the names of those character actor favourites made you happy. Those guys are family.