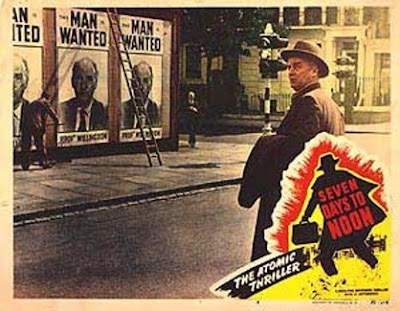 “Seven Days to Noon” (1950) is one of the best thrillers I’ve seen in a long time. Watching it, I couldn’t help but wonder if Alfred Hitchcock saw it and used elements of it for his future movies.

Directed by twin brothers Roy and John Boulton, the British-made “Seven Days to Noon” relates what happens when one of England’s leading nuclear scientists, Professor Willingdon (Barry Jones) steals a small nuclear device and threatens to blow up London in seven days if the country continues to stockpile nuclear weapons.

Andre Morell plays Scotland Yard Superintendent Folland, who is assigned to track down Willingdon. He brings in Willingdon’s assistant Steve Lane (Hugh Cross) and daughter Ann (Sheila Manahan) to help track him down. As the deadline approaches and Willingdon is still at large, orders are given to evacuate London, not only of its people, but of its national treasures, artwork, etc.

The scenes of London’s evacuation are very well done and realistic, and the many acknowledgements at the beginning thanking the people and government of London for their cooperation are well earned.

It’s interesting that the opening credits don’t include any cast members, though all technical credits are shown. It’s like the Boultons didn’t want the audience to notice the actors, but instead concentrate on the story.

Another Hitchcock connection. For years, it’s been reported that the first time movie audiences saw a toilet flush on-screen was in “Psycho” (1960). It could be true, though I’m always leery of any movie claiming to be the first of anything. Still I was somewhat surprised to hear an audible toilet flush during a scene where the British Army is coordinating house to house searches throughout London. One solider is seen standing in the hallway of a house until another soldier opens a door and you hear a toilet flushing in the background as he emerges. He says something like, “No one in there” and they go off to search the rest of the house. Today I wouldn’t bat an eye, but seeing it in a 1950 movie is a bit jarring. 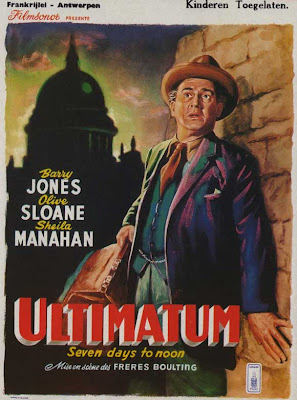 “Seven Days to Noon” has special resonance for fans of Hammer horror films. Andre Morell was a well-loved actor in quite a few of Hammer best films, including “Plague of the Zombies” (1966), “The Mummy’s Shroud” (1967) and one of the best Dr. Watsons ever, in Hammer’s “The Hound of the Baskervilles” (1959). Here, he’s the ideal Scotland Yard superintendent, cool and calm under the most difficult of circumstances.

Composer James Bernard, who wrote so many memorable scores for many a Hammer movie, came up with the story idea with real-life companion Paul Dehn. Bernard and Dehn won an Academy Award in 1950 for Best Writing – Motion Picture Story. Dehn was a terrific screenwriter, with most of the “Planet of the Apes” sequels (either story or screenplay), the exemplary “Murder on the Orient Express” (1974) and “Goldfinger” to his credits. For the latter, I’ve always found it amusing that one of the greatest heterosexual fantasy movies of all time was co-written by a gay man.

The film runs a crisp 94 minutes and the suspense begins immediately with Willingford’s letter being delivered to 10 Downing Street and doesn’t let up from there. The black and white photography gives the movie a strong documentary-like feel and the scenes of the near empty London streets are very chilling. It’s easy to see why this movie wowed critics and audiences back in 1950. It holds up very well today.
Posted by Kevin Deany at 12:52 PM

Kevin, I just saw this movie on TCM last year and couldn't agree more with your assessment. It's a gripping little thriller from start to finish. By the way, I just bought the Hammer Icons of Suspense DVD collection and watched Andre Morell opposite Peter Cushing in CASH ON DEMAND, a nifty B-movie with fine performances from Andre and Peter.