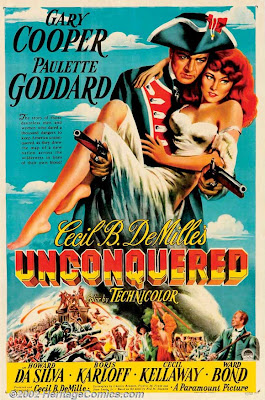 I had a blast watching “Unconquered” (1947) the other night. It’s a very enjoyable movie – emphasis on the word movie. It’s not a film, it’s a movie. And not just any movie, but a Cecil B. DeMille movie.

I like DeMille movies enormously. They’re rarely boring and almost always very entertaining. I even enjoy the often tableaux-like staging of his dramatic scenes. With his start in silent films, where a picture was worth a thousand words, DeMille always knew how to stage his scenes for maximum impact. 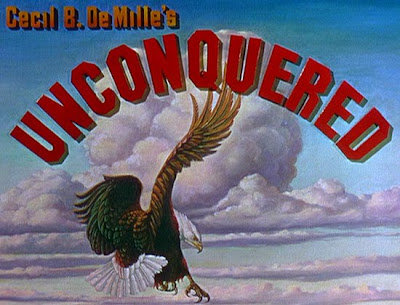 “Unconquered” takes place in colonial America in 1763, in a period rarely covered by movies, the era between the French and Indian War and the American Revolution. It stars Gary Cooper and Paulette Goddard in a two-and-a-half hour running time filled with action, romance, narrow escapes, hissable villains and last minute rescues. The budget was about $5 million, a huge amount at the time, and it’s all on the screen.

A better title for the film might be “The Perils of Paulette” for Miss Goddard undergoes enough trails and tribulations for a dozen movies. Her Abby character is placed on trial for murder and is sentenced to be hung, but is given the choice between hanging or being sold as a bond slave in the American colonies. She chooses the latter, and if that weren’t enough, through villainous chicanery she is sold not once but twice as a bond slave. 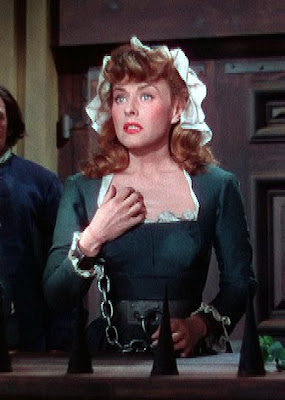 That’s what happens when your oily bond slaver is played by Porter Hall. DeMille also had Hall play Jack McCall, who shot Wild Bill Hickock (Gary Cooper) in the back in “The Plainsman” (1936). DeMille must have liked his sniveling manner to cast him in such roles. (Most audiences today are familiar with Porter Hall as the twitching psychiatrist Sawyer in the 1947 “Miracle on 34th Street”).

Abby is originally bought by Captain Christopher Holden (Gary Cooper) so she won’t be sold to his enemy Garth (Howard DaSilva). Holden knows Garth is selling guns and tomahawks to the Indians in hopes of instigating a war between the Indians and the white settlers. Holden immediately sets her free but Garth reclaims her as his.

There’s not a lot of physical action in the first half of “Unconquered” but it’s never boring. The Technicolor photography means it’s the shiniest version of colonial America you’ll ever see, but that’s fine with me. It’s not a history lesson, after all, but a rip roaring yarn.

Abby gets ogled by every man she meets – when you look like Paulette Goddard and there aren’t a lot of women around in the original 13, that’s bound to happen. She gets captured by Indians, and is threatened with burning at the stake by the Senecas. The Seneca chief is played by Boris Karloff and the medicine man is played by, of all people, Marc Lawrence. See what I mean, it’s a movie!

There’s an exciting canoe chase, a mad dash across the rapids, a waterfall sequence that has to be seen to be believed and an Indian siege of Fort Pitt complete with showers of fireballs and flaming arrows. Of course there’s only one man who can bring peace to the frontier and that’s Holden. The British Army wants him for desertion (he had to save Abby), but he’s going to do everything he can to save Fort Pitt and quench the uprising, all while falling in love with Abby and trying to settle his old score with Garth.

It all plays out magnificently with a memorable climax involving the last minute rescue of Fort Pitt. More I will not say, but that scene always made an impression on me.

The treatment of the Senecas is not very P.C. They’re presented as monosyllabic savages who accept the surrender of the settlers before massacring them. However, Katherine DeMille has a good role as Garth’s Indian wife Hannah who won’t stand by while her husband paws at Abby.

I couldn’t help but be amused at the sequence where Abby is tied to a stake during her Indian torture sequence. The Indian women come to tear at her clothes, but they don’t get away with much and we get a mere glimpse of leg. That’s the Hays Office for you. 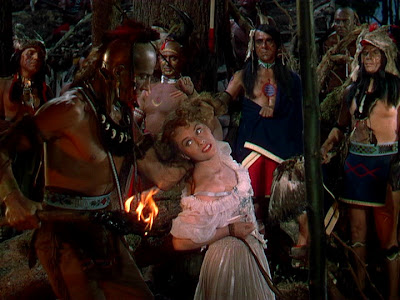 I could only think back to the pre-code DeMille of “The Sign of the Cross” (1932) where young nubile Christian women martyrs were tied naked to stakes in the arena and threatened by gorillas and alligators, to the screeching delight of the Coliseum audiences.

If there was no Hays Office in 1947, I’m sure Paulette would have been barely clad in the stake sequence before her timely rescue by Captain Holden. As it is, by this point, I’m sure Abby was thinking she should have taken the hanging option back in England.

Cooper is a natural in roles like this. His best scenes are at the beginning when he outbids Garth for Abby by adding “and sixpence” to Garth’s bid. With his natural ease and likeability, it’s easy to see why Gary Cooper was one of the biggest stars the movies ever had. I wish there were someone like him today.
Posted by Kevin Deany at 1:59 PM