Time Out for Rhythm 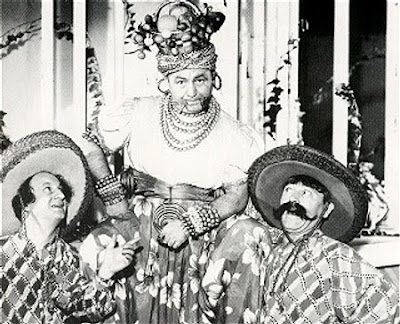 Thanks to TCM, the most pleasant viewing surprise I’ve had in a long time was “Time Out for Rhythm” (1941), a nice little Columbia B musical starring Ann Miller, Rudy Vallee and a couple of Warner Bros. refugees, Rosemary Lane and Allen Jenkins. But most important, The Three Stooges are in it. Big time.

I didn’t know anything about this movie, but did recall seeing the title in a Stooges filmography. I was expecting a cameo appearance, or maybe having them show up in a musical number. To my very great surprise, and delight, they are featured throughout the whole movie and enjoy as much footage as the film’s stars. It’s like discovering previously unknown Stooges shorts from the Curly era.

The plot is typical of these B musicals, a trifle to hang an assortment of production numbers on, the best of which is a terrifically imaginative production number called “Boogie Woogie Boy” performed by Glen Gray’s Casa Loma Orchestra. Rudy Vallee and Richard Lane (Inspector Farraday from the Boston Blackie series) are bickering theatrical producers always on the lookout for talent. They spot Ann Miller, a maid who is first seen tap dancing to a song on the radio. There’s a tempermental star (Rosemary Lane) who you just know will cause so many problems the producers will call on Miller to save the day.

Interspersed among all this are The Three Stooges who are desperate to break into show business and are forever hounding Vallee and his aide Allen Jenkins. Devoting so much footage to the Stooges means there’s less of the preening Rudy Vallee to contend with, which is a good thing. (He was one year away from career resurrection via Preston Sturges in “The Palm Beach Story.”). They do their famous “Ma Ha” routine and generally make a nuisance of themselves. 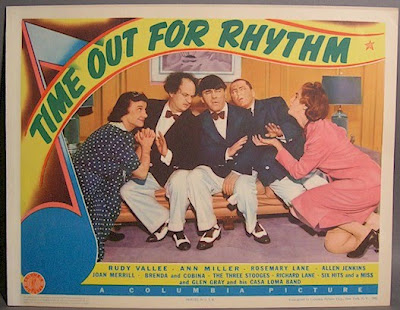 Some of the funniest scenes show the Stooges interacting with two women (Blanche Stewart and Elvia Allman) who may be homelier than they are. At one point one of the Stooges (I forget which one) says something like “I can’t believe five people who look like us are in the same room together.” The girls later join the boys at the end for the big musical number. I’m not familiar with these actresses and not sure if Columbia was grooming them as a female Stooges team, but they were very funny and played well with the Stooges.

Watching “Time Out for Rhythm” was like watching a film from an alternate universe. It’s odd seeing the Stooges acting with name players from the era. It’s one thing for them to share screen time with Clark Gable and Joan Crawford in “Dancing Lady” (1933) when they were still with Ted Healy and hadn’t yet fully developed their personalities.

In something like “Time Out for Rhythm”, however, they are completely and gloriously The Three Stooges, accompanied by the full arsenal of sound effects courtesy the Columbia short subjects department. Hearing these familiar sound effects one minute, and then Rudy Vallee crooning a love song a few minutes later, is surreal. Adding to the oddity is regular Stooge foil Bud Jameson as a short order cook in one scene. What are all these denizens of Stoogedom doing in Rudy Vallee and Ann Miller land? The Boys are even referenced by name in the final production number of the title song, a terrific number from Ann Miller. 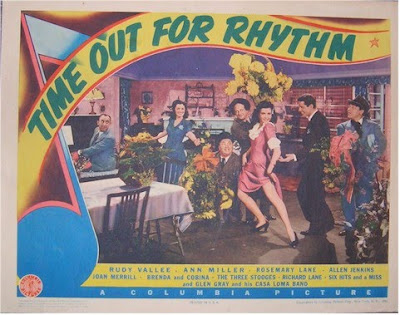 There’s no great meaning in this movie, just 75 minutes of an unending series of funny comedy skits and musical numbers. Sony has had enormous success with their chronological sets of Three Stooges shorts, with the eighth and final edition due June 1. I recall reading an interview with a Sony home video exec who said the titles were so successful they weren’t considered catalog titles, but regular DVD issues. If Sony is still looking to make more money off the boys, they should consider releasing “Time Out for Rhythm” on DVD and playing up the Stooges on the cover. Stooges fans would be pleased. What a treat this movie was.
Posted by Kevin Deany at 12:39 PM

How about that. I need to check the TMC schedule more regularly.

Dees: I'll let you know next time it's on. I'll be on the lookout for it myself.